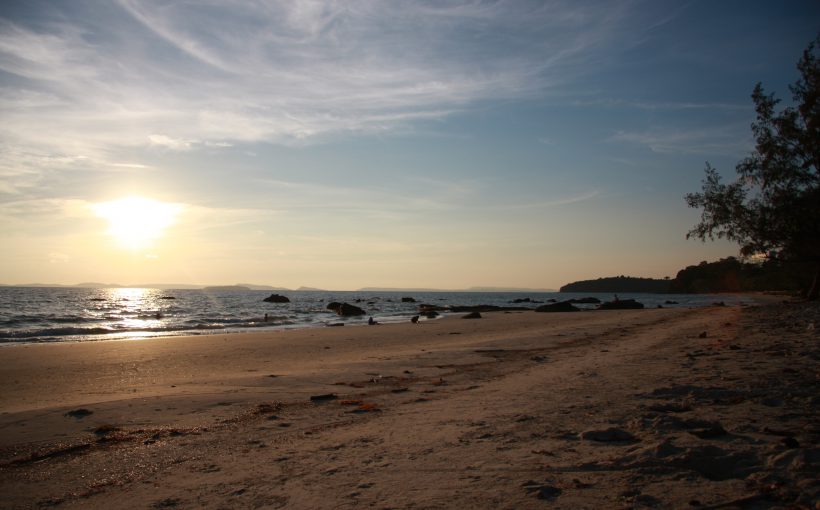 Sihanoukville is Cambodias beach ressort. I wouldn’t call it pretty but it has something to it. For a start there are the fantastic beaches. They are by all means excellent. Also the climate is different. You get a nice breeze from the sea so it isn’t as hot as it is in Phnom Penh or up north. That’s a welcome change.

The sunsets are spectacular. You get a different view from the different beaches. My personal favourite was Independence beach followed by Ochheuteal beach. Unlike most places you can rent a scooter and drive around. This I highly recommend. It’s the only way to visit all the beaches.

Pass the port in the northern part is the red light district which you may want to avoid. It is considered dangerous and dodgy. If you go watch you belongings.

The above had some effect on the area of Weather Station Hill. It used to be travellers favourite but most places have shut down because of it being so dodgy.

The best beach and some good nightlfe is around Ochheuteal beach. There are plenty of guest houses and a place for every budget. Ochheuteal beach is a good 3 kilometres long. While the first part if packed with restaurants and annyoing merchants it soon gets quiet and with a bit of luck you have the beach to yourself.

In the evenings the restaurants offer cheap and good seafood from the BBQ. closer to town you find a few nice bars where you can chill out or get locked.

The city centre is rather dull and busy. Personally I wouldn’t stay there. It is more popular with expats. There are a few English bars with big screens and cheap booze. The main road Ekareach leads from the Golden Lions roundabout near Ochheuteal beach through the entire city. Near the police station is the Vietnamese embassy. The issue visas for Vietnam the same day. 45 Dollars is pretty expensive though.

You my hear that Otres beach is rather quiet and mellow. I beg to differ. There are just as many restaurants on the beach and it is a long drive from town. The guest houses there are very basic. I did not fancy them.

It is difficult to recommend a place. It really does depend on your budget.

The best place in town is the Independence Hotel. It is beautifully renovated and in a prime location on a small hill directly above independence beach. Part of the beach is reserved for hotel guests.

A solid choice is Orchidée Guest house in 23 Tola street. If they are booked out there is a place right next to it that is just as good. A room with air condition cost around 20 Dollars.

The Snake House keeps its name for a reason. The place is expensive but awesome with a fantastic restaurant and a girlie bar. It’s very popular with Russians as it seems.

My favourite place was the Snake house. They have Cambodian and Russian specialities. The tables in the restaurant are put around a huge aquarium with exotic fish. The actual name derives from the collection of snakes they got (not on the menu). Dotted around the place they keep all kinds of snakes, birds, Iguanas, fish and crocodiles. My personal highlight there was the sea turtle in the restaurant. You feel a bit sorry for her since the aquarium seems awfully small but what a beautiful creature.

If you stay near Ochheuteal beach there are loads of restaurants directly at the beach. They offer cheap and fresh seafood from the BBQ. One can hardly argue with 3 Dollar for a meal and 50 cent for a draught beer.

Near the Golden Lion Roundabout seems to be the place to be when it comes to entertainment. There is a bus market with plenty of noise, a casino and a number of small bars.

Most famous is Utopia. It is rather good looking. The place is normally packed. The music is particularly loud and the PA partciularly bad. Why it is so popular I do not know.

At then end of Ochheuteal beach (technically that part is called Seredipity Beach) is the nap time. It’s not pretty but the music is good and the beer cheap. They often look for Westerners as staff. If you are up for a party this may be the place to be.

Feedback from our reader Tom:

A few facts on Sihanoukville which Expats here call : Snooky. The town has some of the best beaches around but unfortunately makes little use of them. Victory beach near the harbour has been sold/rented to the russian owner of the snake house. It is ok but for many too close to the harbor. Hawaii beach has been sold to a Resort, so have several others along the coast and are therefore inaccessable for non Resort Guests.

Some Beaches are simply fenced up with corrugated Steel and are subject to Snooky’s biggest business: the land speculation. Although there is a lot of building going on Snooky has no real developement of infrastructur. Most western guests are Backpackers (the rock bottom of it) or stranded Pattaya crowd in the same category. Apart from the still open Otres and Ocheteal Beaches there is not much to do in Snooky. The rock bottom Tourism has taken it’s toll on the Khmer People which are confronted with Drug Addicts, Alcoholics, Riffraff and other western exports. Their attitude towards Tourists have taken the same path as on Bangkoks Kao San Road.

Snooky is also full of foreign funded NGO which give the impression that they are the one’s that really own the town. If you are a white male you want to be extremely vigilant about them since their income is mainly generated on the protection of children making you the possible bad guy,child abuser, pervert and pedophile. Stay away from children as far as you can, don’t give them anything and be aware of the ever ready Camera pointing at you whenever there is a kid around. For more details you can check out tpf-cambodia.com. This may save you from trouble you would never expect.