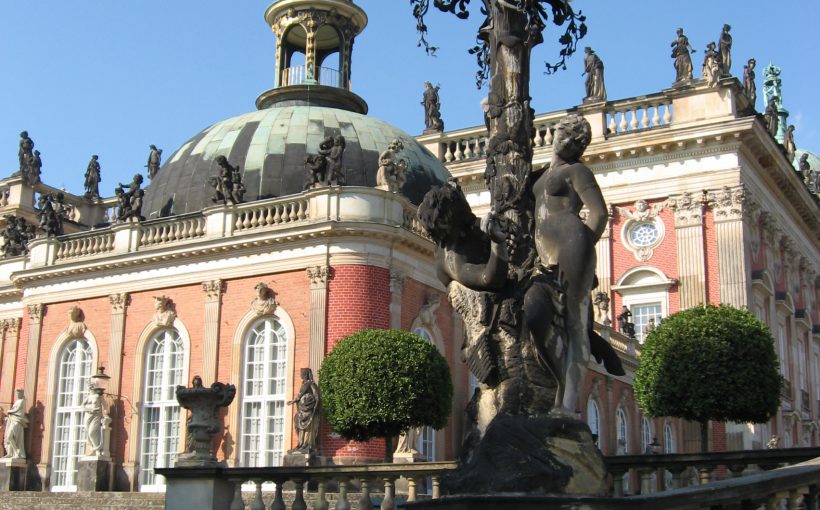 Potsdam is the capital of Brandenburg. It is located right next to Berlin. When you cross the Glienicker Brücke they pretty much share a welcome sign. Potsdam is much smaller than Berlin but much prettier and with a wealth of history and sights worth visiting including the world-famous UNESCO heritage site Palace Sanssouci. The best thing is; you can pretty much walk everywhere.

Tours Potsdam: There are many tours in Potsdam by bus, boat or walking. You can get a good overview of the offered tours at Getyourguide.com

Potsdam has approximately 180.000 inhabitants. It is by far the biggest city in the state of Brandenburg but that isn’t saying much. Next to Berlin it is tiny. Potsdam is right next to Berlin in the southwest of the German capital. The two cities are connected by S-Bahn, bus and ferries crossing the Wannsee.

Potsdam historically was the residence of the kings of Prussia and the German Emperor until 1918. There is a number of very impressive castles and palaces, beautiful parks and an extensive historic city centre. Sanssouci is the largest World Heritage Site in Germany. Potsdam is also a well-known for its film production studios. They claim, that Babelsberg is the oldest large-scale film studio in the world. Potsdam also has a university and some 30 research centres. It is home to SAP and the Hasso-Plattner-Institut, a centre of excellence for IT and data science.

Potsdam is located on the river Havel and surrounded by lakes. While this makes it an awesome location it also creates immense headaches for traffic planners. Rush hour traffic in Potsdam is a nightmare.

The city does have a decent public transport system. The main train station (Potsdam Hauptbahnhof) is a major hub. It is served by long distance train and has a direct S-Bahn link to Berlin city centre and Berlin airports. In front of the station there are trams and busses. Going there by car is not such a good idea. There is a taxi stand of course.

The main public transport system in Potsdam is the tram. It reaches in to most corners of the city. Where it stops you have busses. This all works well during the day. Night service is a bit of different story. Night links are only going Friday and Saturday. Depending on where you stay this can be a bit of a nightmare. If you go out to Berlin you may have to leave there 10 PM just to get the last bus.

For sight seeing I would recommend using the city tour bus. It is a Hop-on / Hop off. If you like it ultra cool, there are other options. My favourite has to be the guided city tour in an old soviet minivan. More here

It is divided in to 34 quarters. The Old Market Square (Alter Markt) is pretty much the historical city centre. Nearby are the rebuilt Fortuna Gate and City Palace. The latter is now known as Brandenburg Landtag, so the state parliament. The Old Market is dominated by the St. Nicholas Church (Nikolaikirche).

Not far away is another famous landmark of Potsdam. The Dutch Quarter (Holländisches Viertel) is a collection of around 150 houses, built of red bricks in Dutch style. Apparently it is unique in Europe.

Tours Potsdam: There are many tours in Potsdam by bus, boat or walking. You can get a good overview of the offered tours at Getyourguide.com

North from there is the Russian colony of Alexandrowka. It is quite cute actually. On top of a small hill is an Orthodox chapel, below are wooden houses in between (I think apple) trees. It is part of the UNESCO World Heritage Site Palaces and Parks of Potsdam and Berlin.

North from there in walking distance is the New Garden (Neuer Garten), an English. Style park with two palaces. One of them is Cecilienhof, where the Potsdam Conference was held. The second one is the Marmorpalais (Marble Palace). The park is right on the Wannsee yos you already see Berlin from there.

Another place I quite like is the Biosphäre Potsdam. That’s a botanical garden and two tram stops from Alexandrowka. You can pretty much walk.

The world-famous UFA film studios are in Babelsberg, south-east of the centre. They do a pretty cool studio tour there. (Actually right now they don’t but will resume in August 2020). And if you think they only do German stuff there, you are wrong. I do recall movies like Bourne Ultimatum, Monuments Men, Inglourious Bastards, Cloud Atlas, Valkyrie and the Oscar winning drama The Reader being made here.

Very highly recommend is the Filmpark Babelsberg, basically right next to the studio. Großbeerenstraße 200, 14482 Potsdam. They have a stunt show and a number of attractions. Keep in mind you can easily spend 5-6 hours there. Tickets cost 22 Euro for adults, kids between 4 to 16 pay 15 EUR. Fun fact: You get free admission on your birthday.

And then there is Sanssouci of course.