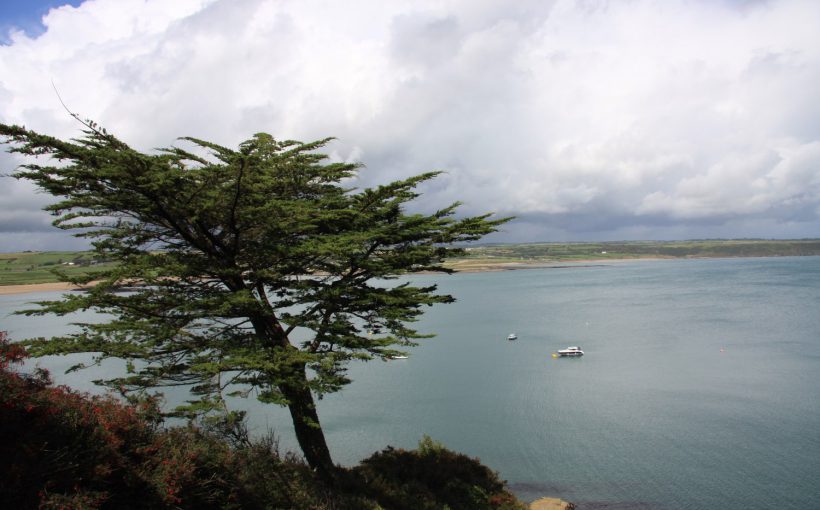 The small town of Ardmore is situated on the Ardmore Bay. It is only a few kilometres east of Youghal on the R673. It is widely believed that Ardmore was home to the first Christian settlement in Ireland. Legend has that St Declan came here some 30 years before good old St. Patrick came to the Emerald Island.

It offers more than just some impressive views; one of the most famous hotels in Ireland for example. The Cliff House is a 4 Star hotel in a breathtaking location. The name gives it away of course but you really do have to see the place in order to believe it. As the name suggests it is built hanging over a steep cliff. If you suffer from vertigo you should think twice before staying there. The view is spectacular though. I found a tiny little bit scary being afraid of heights AND knowing Irish builders but that shouldn’t stop you. It’s still standing so it looks like they got it right.

Ardmore is an interesting place for a number of reasons. The Cliff House for is only one. As I said, if you can afford to stay there give it a go. This place is something else.

One other place I quite like is the local cemetery. It is small but has everything you possibly ask for. There is the almost mandatory round tower, a church in ruins and some pretty grave stones and Celtic Crosses. There is something else; the view! Of all the cemeteries I visited in Ireland – far too many according to the girl friend who at this stage refuses to set foot on any of them – this has one of the finest views.

The round tower is in fairly good shape and an astonishing 30 meters high. I was told it is from the 12th century. Some of the grave stones are really impressive and quite artistic. It may sound a bit morbid but I quite enjoyed strolling around and discovering ever new shapes and forms.

There is something about that small church ruin as well. Its not just some ruin. These are the remains of St Declan’s Church. St. Declan as you will remember founded the first Christian settlement in Ireland. What I call a church in ruins is actually a cathedral and it has an oratory attached. It’s kind of hard to tell. I associate cathedral with big. Anyways; the cathedral dates back to the 13th century the oratory even further. I was told it dates back to the 8th century which is astonishing. One of the walls of the St. Declan church features some impressive stone carvings. They are quite interesting.

The carvings were retrieved form a 9th century building. The main subject are Adam and Eve in the garden and Solomon’s judgement. I will confess that didn’t occur to me when I look at them but then; if everything were so obvious we would pay experts to tell us would we? Much more interesting I found the picture of a harp. The harp as you probably know is a symbol of Ireland and this would be one of the earliest depictions of it.

In the church (cathedral) are two Ogham stones. These are very interesting if you are interested in Irish language. Ogham is often referred to as Celtic Tree Alphabet. It’s basically a really bizarre alphabet that kind of reminds me of Persian cuneiform. It’s just as obscure.

You will find these Ogham stones all over Ireland. Quite frankly that I don’t really get the fascination with these stones but I will admit that they are interesting. They have this touch of “old”. I can’t explain it any better.

The cemetery is on top of a hill overlooking the entire village. If you only have time for one thing in Ardmore, go for the cemetery. It’s brilliant.

What else is there to see? Well I already mentioned the Cliff House. The entire village is quite cute. It’s much more laid back than other beach resorts. I read that this is partly due to their sewage system being a bit 19th century if you know what I mean.

Apparently this sewage is giving the locals a lot of headache. Right now a lot of crap is going in to the sea which is threatening the status of the local beach. So far it is a blue flag but if the situation deteriorates further they might loose the blue flag. Since the water is too cold for swimming anyways I don’t particularly care.

Good news if you are into diving. In 1987 a ship sank near the village. The wreck is a perfect spot for divers and accordingly popular with them. The waters around Ardmore seem to be treacherous anyways. The Samson – the wreck just mentioned – sank near the Ram head but there are loads of wrecks covering the seabed of Ardmore bay. Most popular with landlubbers is the Fee des Ondes. You can see the remains at low tide. Other popular names are the Anne Sophie, Scotland, Sextusa, Peg Tranton and the Marechal de Noailles.

To get down to the beach follow the path from the Cliff House. It’s capturing. You will pass the old Coastguard Station, St Declan’s Cell and a Holy Well. You will also pass a ruined church, the Samson Wreck and a couple of old lookouts. On a nice day it’s quite an interesting walk. Parking at the Cliff House is restricted so best leave your car somewhere in the village.