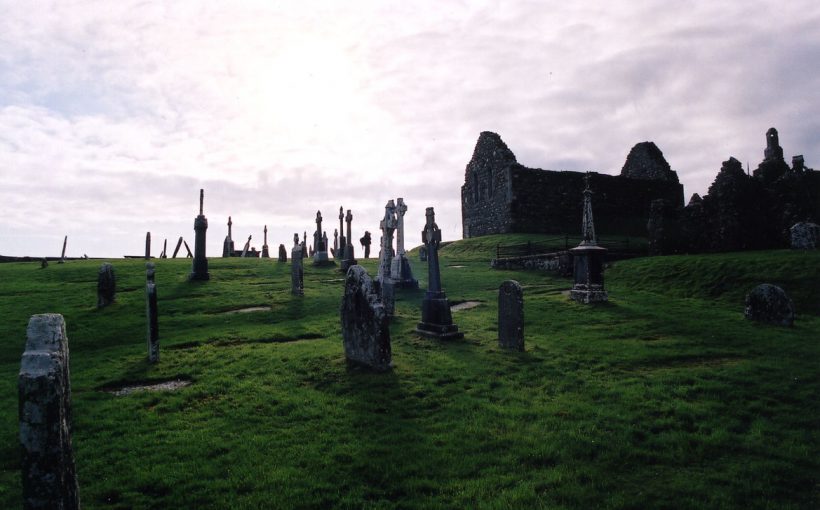 Ireland is the third largest island in Europe. It is also known as Éire or Emerald island. When we talk about Ireland we would normally refer to the Republic of Ireland. The northeastern part – namely the province Ulster – politically belongs to the United Kingdom and is called “Northern Ireland”.

Ireland (the Republic) is part of the European Union and the Eurozone. The official currency is the Euro (€). The official language is Irish (Gaelic) but when you travel in Ireland you can hardly tell. Depending on where you are in Ireland you might have trouble telling what language it is they are speaking but I would say this is example below is the exception. See if you can understand this fella.

With a few exceptions in the Ghaeltacht everyone is using English as the first language. Irish only recently became an official European language. I believe all official signs in the country are in Irish but – and this is an important but – have an English translation as well. Otherwise you would be in trouble; from the look at it you just couldn’t tell that Baile Atha Cliath means Dublin.

Introducing Ireland to a reader is a bit of a pointless exercise. Everyone heard of it and has a clear idea what Ireland is all about; Green hills, sheep, loads of rain, crazy Irish, music and pubs everywhere. Well the problem is that although its not the complete picture it’s not entirely wrong either.

What you see in movies is in many ways a stereotype but that doesn’t mean that there is no truth to it. I consider Ireland a special place with very special people and I mean it as a compliment.

Everyone here seems to play an instrument, is a gifted singer or dancer. Being in the right place at the right time you will have the time of your life.

The Irish are cheerful people and it is contagious. The pub is a popular meeting point and with the weather being as rotten as it is you really can’t blame them. I’d do the same. Pubs are not exactly cheap but you normally get good value for money. All the good stuff is expensive in Ireland.

Travelling on budget is a challenge. The best way to approach it is a “no worries” attitude. Best don’t compare with prices back home (unless you are Scandinavian). You may well have to sell your house and mother in law afterwards but as long as you travel you won’t need either of them anyways.

Ireland – and this is true also – is a beautiful place. The countryside is mellow with a few mountains, wide plains and some spectacular cliffs on the west coast. If you don’t mind the occasional rain it is ideal for hiking.

The people are extraordinary friendly and easy to approach. Most Irish are always up for a little chat so take advantage of it.

Ireland is part of the European Union. The official currency is the Euro. Dublin is the capital and by far biggest city. It is the nerve centre of the Irish economy and also the political and cultural capital. Personally I wouldn’t waste too much time there but then I’m not big on cities in general. There isn’t that much to see and it is a rip off.

Ireland is not particularly big. A round trip can be done in about two weeks without to much of a rush. However DON’T. When in Ireland best travel slow. The true beauty of Ireland is not the countryside or the sheep; as far as I’m concerned the best bit bout Ireland is the people. They are friendly, open minded and hospitable. Take advantage of it and you will have the time of your life.

when it comes to public transport Ireland is not exactly paradise but it is OK. The easiest – beside a car – is Bus Éireann. The busses go relatively frequent and are cheaper than the train service (Irish Rail). Even better, by bus you get pretty much everywhere. There are only few trains in Ireland and despite their fancy name (Intercity) they are rubbish. On top they are expensive. What concerns me most is something else.

Only recently a commuter train escaped disaster thanks to an observent train driver. While driving towards Donabate he noticed that a section of the railway bridge ahead of him was missing. It had collapsed earlier on. A subsequent inspection of all railway bridges in Ireland revealed that a fair percentage of them are no longer safe. No way I am getting on to one of these trains!

There are local planes which I never used and – considering that Ireland is tiny – are pointless the least to say. The biggest airport is in Dublin. Other international airports are in Shannon and Belfast (UK). You are most likely to arrive in one of these.

The alternative is a ferry. There a few operators and a few different routes. From the continent you can go directly from Roscoff or Cherbourg (France) to Rosslare or you go through the UK. To get there you can use the tunnel from Calais to Dover and then from Pembroke to Rosslare or Holyhead to Dublin. More info on: Irishferries.com.

The best advise I can give in regards to travel around in Ireland is the car. Rental cars are relatively cheap and you will soon find out how much time the safe. Bus Éireann might be the best way of travelling on public transport but that doesn’t mean it is any good.

The only reason to not go by car is if you are planning a hiking trip and only want to get to your starting point. And on that note; if you even consider to cycle you obviously know nothing about Ireland. The roads are rubbish. So is the weather and after reading the next part you know why else you should not travel by bike.

Driving in Ireland – a few pieces of advice

If you rent a car be extra careful. In Ireland they drive on the left side which takes time to get used to. That isn’t the biggest problem though. Irish drivers have a bit of a reputation. An L on a car for example – and you’ll see plenty of them – means that this driver has no driving license. Irish actually practise driving on public roads until they are confident enough to take a test. It is as dangerous as it sounds.

This probably explains the problems they seem to have with traffic lights. When the traffic light switches to green you’d normally put in a gear and drive. Well, not a good idea here. Many drivers seem to have difficulties telling the difference between green=go and red=stop. To explain; I am not talking about “orange”, you are driving fast and the traffic light switches to red while you are just entering the crossroad. I am talking about dark red here. Even bus drivers do it occasionally. It’s insane.

There are more Irish “specialities”. Very common is driving with 80 km/h on a fast lane on the motorway. It can drive you nuts. On the other hand I have seen many Irish driving extremely fast under rather poor conditions. On of the reasons could be that none of the speed cameras here seem to work.

Another quite annoying thing is drivers switching on their fog lights at night for no reason (and I am not talking about the front lights, I’d understand that). Needless to say it is extremely irritating when you have to drive behind them.

To compensate for that half the cars here seem to have broken or no lights at all. Honestly, I’ve never seen so many cars with broken headlights in my life and funny enough even with new cars. Car manufacturers insist that with modern illuminants you’ll never have to replace them (during the normal life expectancy of a car). Still in Ireland you’ll even see brand new Mercs and Beamers with a broken light. I have no idea how they do it.

Quite frankly, I am not surprised that Ireland has the second highest rate of fatal accidents in Europe. Rumour has that new legislations will come in place in regards to L-drivers (like they are no longer allowed to drink and drive) but that won’t solve the problem as long as they this “what’s the worst that can happen?” attitude towards driving in general.

Bottom line – and that’s all I’m trying to say – if you rent a car be careful. Driving in Ireland is tricky and not just because of the Irish drivers.

Irish roads are a little funny sometimes. The speed limit is determined by the type of road but not the actual traffic situation. A national road will have a speed limit of 100 km/h even if it is only 1.50 meters wide and leads in switchbacks down a steep mountain. And talking about driving: Never trust any road signs in regards to directions.

Other than that I would consider Ireland a safe place to travel. The exceptions are dodgy areas in bigger cities but that is something I don’t have to mention I guess. That seems to be universal feature of modern cities.

Most popular are hostels. They are relatively cheap and you find them pretty much everywhere. A reliable source for finding hostels is the website Hostelworld. Some of them also have a camp site but quite frankly; you have got to be either hard core or desperate to camp in Ireland.

There are some camp sites in Ireland but they are mostly aimed at caravans. Farmers will often allow you to pitch up your tent but a) don’t expect it to be free of charge and b) don’t expect any facilities.

If you prefer to travel in style and like your breakfast like I do – hot, greasy and plenty – be on the look out for a B&B. They are fairly good but not exactly cheap. They charge 30-35 Euro per bed which I find outrageous. In for example the UK you get charged per room and a similar rate.

Even more upscale are hotels which on average start at around 40 Euro (if you are lucky per room) but from there the sky is the limit.

It is illegal to bring milk products and meat into the country. From my experience though you can drive a herd of cows through Dublin airport customs without anyone being bothered by that. Don’t rely on it.

Since Ireland is part of the EU all the normal regulations apply in regards to booze and fags. When you travel within the EU you can pretty much bring as much as you want, given that you can convince the customs guy that it is for your personal use.

Any cookies that may not be particularly necessary for the website to function and is used specifically to collect user personal data via analytics, ads, other embedded contents are termed as non-necessary cookies. It is mandatory to procure user consent prior to running these cookies on your website.