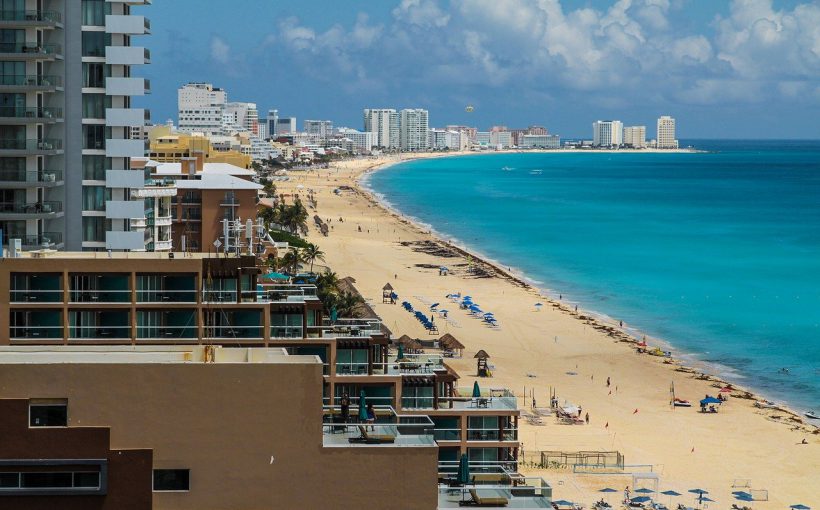 I had a flight into Cancun and that’s pretty much the only reason why I went there. The area must have been amazing before the Mexican tourist board started to develop the place. It is heartbreaking what they did to this once stunning area.

Originally Isla Cancún was what it says: an island. When the tourist board started to develop the area they also built a dam that connects the island with the mainland. The main hotel area is around the Nichupté Lagoon.

Just off the coast is Isla Mujeres. To get there best take the main ferry. It is located off Bonampak. Rumour says that Isla Mujeres is a lot better than Cancun I just can’t believe it so I didn’t go.

Tours and Day Trips Cancun: There are many great tours in and from Cancun: This link gives a good overview of different tours and excursions

The other side of Cancun is downtown around the bus terminal. This is where you would arrive with the public bus (ADO, 35 Pesos) from the airport. It is a shit hole, ugly, noisy and loads of traffic. If you have to spend the night stay close to the bus terminal. That’s what I did anyways.

The hotel was expensive and a total dump but probably pretty much average for Cancun. It didn’t bother to write down the name. It was two blocks south from the bus terminal in a quiet side road.

Since I just arrived I went for a walk to check out the place. There weren’t any tourists in this area which I actually liked. It was busy though. I found a quiet bar just around the corner and first was shocked. 40 Pesos for a bottle of Sol seemed quite expensive but I learned that for the touristy part of the Yucatan peninsula that’s pretty much average.

The bar turned out to be nice. I didn’t ask any questions – since I don’t speak Spanish – and they left me alone. Whenever my beer was empty they gave me a new one and only after a few bottles asked if I actually want one. I first thought that was strange but it turned out that the beer they just gave me were free.

The bar – and I was the only foreigner there – turned out to be quite good and not expensive at all. Everyone was incredibly nice. I left a huge tip at the end. I’m not sure if that’s normal downtown but it might just be. I don’t think they see too many tourists and only know the package holiday makers that stay in the Zona Hotelera.

You should actually check that out. It is a narrow strip of land just off the coast. It is shaped like a seven and – seriously – must have been a paradise before they started to build five star hotels, fancy night clubs, expensive restaurants, shopping malls and American fast food chains on it. The scariest thing I saw is Margariteville. It is some sort of theme park where you can pretend to be a pirate (Disney style) and get hammered. I only watched a video at the airport where they have a restaurant but that was good enough for me. I’ll probably have nightmares from that.

Weary Traveller Hostel – From the bus terminal walk about 3 blocks up Uxmal. Noisy but OK with free breakfast and Internet.

That’s pretty much all I can say about Cancun. I can’t recommend any place to eat since I skipped both dinner and breakfast but it’s probably average Mexican standard meaning OK. Check prices before you order.

There was no reason to stay so I left first thing in the morning.

Tours and Day Trips Cancun: There are many great tours in and from Cancun: This link gives a good overview of different tours and excursions