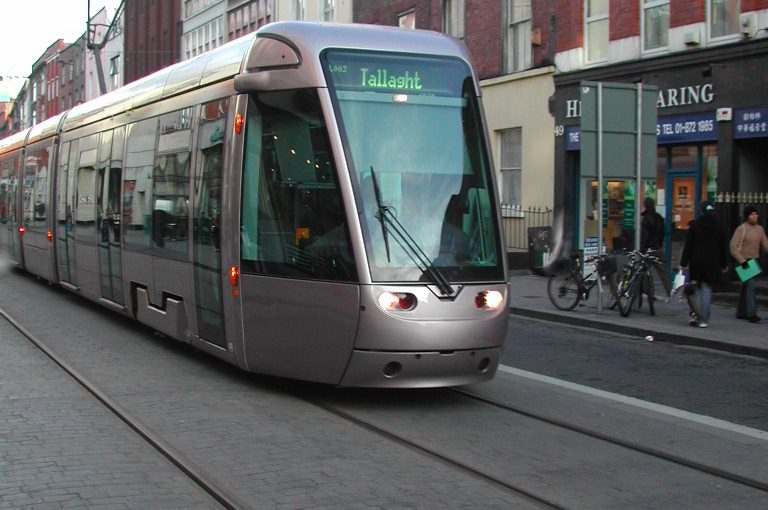 The red line of the LUAS is more important for tourists. It connects Dublin Harbour, the important long-distance train stations “Connolly Station” and “Heuston Station”, the long-distance bus station “Busaras” and the Guinness Brewery with the centre of Dublin.

From the “Abbey Street” stop it is only a few metres to O’Connell Street. Almost all major bus lines of Dublin meet here. But the real main task of the Red Line of LUAS is to transport commuters from the densely populated suburbs in the southwest of Dublin to the centre of the metropolis.

The green line runs from Broombridge to Bride’s Glen in the south of the capital. Both lines are meanwhile connected with each other. It took the city forever to make that happen. In the past, you had to walk from Abbey Street” to “St Stephen’s Green”. Fortunately those times are over.

Transfer by bus from Dublin Airport: Those arriving in Dublin by plane will need a transfer in the city centre. Taxis are expensive, there are alternatives though. If you travel with a few people you can arrange a private transfer. For three people it works out at around 20 Euro per person.

You can even go by public bus. The DoDublin Freedom Card cost 45 Euro per person but is valid for 72 hours and gives you unlimited access to all public transport. On top you get a 48 hours pass to the Hop-on-Hop-off busses.

A new planned line of the LUAS was pushed forward indefinitely. However, the construction of new LUAS lines in Dublin is sorely needed – on the European continent almost every city with 200,000 inhabitants has a better public transport system than Dublin. The Irish capital, with its suburbs, has over 1 million inhabitants.

The LUAS vehicles are modern. They are strongly reminiscent of newer low-floor trams in other large European cities. However, due to the lack of own lines, the LUAS in the centre is rather slow. Outside the city centre, however, the LUAS is quite fast. The two lines are very long – the red line about 21 km, the green line about 24.5 km. At each stop there are one or more ticket machines.

You can buy single and return tickets which does sound easy enough. The fare depends on the number of zones one passes through. There are five zones in total. A one-way ticket costs between €2.10 and €3.30 for adults in 2018. Returns cost 3.70-5.90 euros.

No, since this is far too easy, the fare also depends on the time of day. Off Peak, i.e. outside rush hour, the same tickets cost 1.44 – 2.45 euros. That is a significant difference.

Attention: With a normal single ticket you cannot change to another LUAS line or bus. There are not even breaks allowed, meaning that if you get off the bus, your ticket expires. Otherwise it is valid for 90 minutes.

Beside the single tickets there are also the Leap Tickets and of course day tickets, 7-day tickets and 30-day tickets. But what is more interesting for tourists is the combi-ticket that costs 10,00 € for one day and 40 € for 7 days. With this ticket, one can use most of the buses as also the LUAS. Fare evasion is not recommended in the LUAS in Dublin. The penalties are high and checks are frequent.

Operating hours and train frequency of the LUAS: During the week, the trams run between 5:30 and 0:30, on Saturdays between 6:30 and 0:30, on Sundays and public holidays only from 7 a.m. to 11:30 p.m. During rush hour, trams run every 3-4 minutes on the two LUAS routes, whereas the interval between trains in the late evening is up to 15 minutes.

The name “LUAS” comes from the Irish language and means “speed”. However, many Irish people claim that LUAS is an abbreviation for something like “Light Urban … System”. But this is wrong.

The prices and information on this page are as of April 2018.