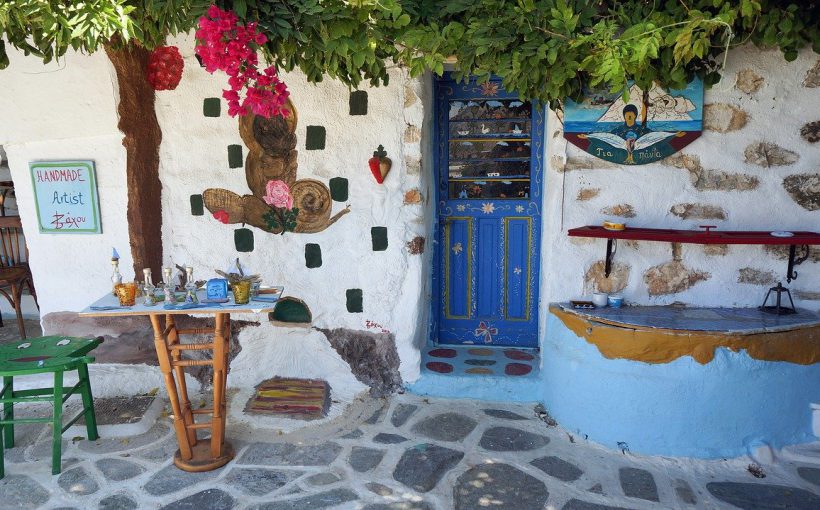 Amorgos is one of the forgotten Cycladic islands in Greece that still remain largely untouched. It also is one of the very reasons why I still like going to the Cyclades. These days you need to look a bit harder but you can still find these more or less unspoiled spots. It worth’s it.

Amorgos is not exactly small – 128 km² – but only about 2000 people live there. The island is pretty close to Naxos and Ios but somehow feels like it is in a different universe. There is nothing wrong with Naxos for example it’s just sometimes when I travel I need time to myself, time to think, time to contemplate. Amorgos is a pretty good spot to do it and it is beautiful.

You don’t exactly go there because of the beaches. There are a few though I consider spectacular. Plakes beach next to Katapola for example I’d actually recommend. It isn’t much more than series of little rock plateaus BUT although pretty close to the main beach the water there is so deep that it is almost black. I am not sure how deep it actually is but I was told that part of the Luc Besson movie “The Big Blue” with Sean Reno and Jean-Marc Barr was shot at Amorgos.

It’s awesome if you are into that kind of stuff. I’ve seen quite a few people that would not go swimming there because they think it is too deep. I personally see no difference between the water being 3 meters or 150 meters deep. You can drown in both. Admittedly though, a Megalodon could hide down in this abyss without you knowing.

Talking about gigantic sharks; I was there with a couple of friends at the time and joking about how you wouldn’t find any sharks bigger than 10 feet in these waters. I actually thought there are no sharks at all in the area. After all I even got attacked by some sort of aquarium fish in Thailand so I really am afraid of the so called life aquatic.

A couple of days later I saw a picture of a local fisherman holding up a shark that was well over 7 feet. I almost fainted. And when I later read that sometimes even great white ones get lost and end up in the Mediterranean I wasn’t amused at all anymore.

Needless to say I survived and I am still convinced that the Greeks kill everything that is in the water and eat it. The biggest fish I saw there was some sort of sprat.

So why would you go to Amorgos if not for the beaches? I’ll tell you. It is a perfect spot for hiking. The island is mountainous with a few spectacular trails. Since not too many people go there in the first place it really is peaceful.

From Katapola there is Minoan site sign posted. I am into that kind of stuff. Since it was late in the afternoon I asked some local how far away it is. He said the magic words: 5 minutes. That didn’t sound right but I ain’t no nit picker so I went for it. 30 minutes later I asked again and this time the answer was a few hundred meters. That didn’t sound so bad so I kept going. And I kept going. What felt like 10 hours later I indeed arrived at the excavation. It probably was a few hundred meters but certainly not on foot. What they probably meant was a few hundred meters above sea level (where I was standing at the time). Or may be they were just taking the piss. Who knows?

I was in bits but at the end I was glad I went for it. The view from there was spectacular and I arrived pretty close to sunset. You can’t ask for more (despite may be a taxi down). The excavation itself wasn’t particularly spectacular and I still doubt it is Minoan but I would recommend it any time.

Another trip you shouldn’t miss is to the old capital Chora. Capital is a bit of an exaggeration it actually is a village. However, it is a very pretty village and it appears to be pretty authentic with little tourism. I quite liked it.

The main reason why people go there is the nearby monastery Hozoviotissa. It is breathtaking; built into a cliff, the walls lined with portraits that display monks and important leaders of the past. And is considered one of the most beautiful monasteries in all Greece and you also get a pretty cool view over the sea. If you want to get in please keep in mind that there are monks still living there. You need to wear long trousers or a long skirt.

Highly recommended is to walk from the monastery down to the beach. It takes about 40 minutes. The sea down there is crystal clear and pretty much as good as it gets.

The main reason for the – at least compare to other Cycladic islands – solitude is that Amorgos is not on any of the major ferry routes. For seasick landlubbers getting there can be a bit of challenge. Take this as a warning.

When you com from Naxos you have a choice between a small ferry (it used to be the Express Skopelitis if that wreck still exists) or a Flying Dolphin. The waters between the Small Cycladic islands (Koufonisi, Iraklia, Schinoussa, Keros and Donoussa) and Amorgos are pretty rough. Apparently two currents meet there. Put it this way; about 90 percent of the people on board vomit or shit their pants. Especially in the enclosed cabin of the Flying the Dolphin the smell alone makes you sick. I consider myself having good sea legs but I wasn’t too comfortable either. If you struggle on a ferry don’t even think about taking either of these boats. There are some big ferries going to Amorgos. Get one of those!

I stayed on the local camp site in Katapola. It wasn’t exactly brilliant but good enough for me. There are enough rooms to rent so you shouldn’t run into any trouble finding something.