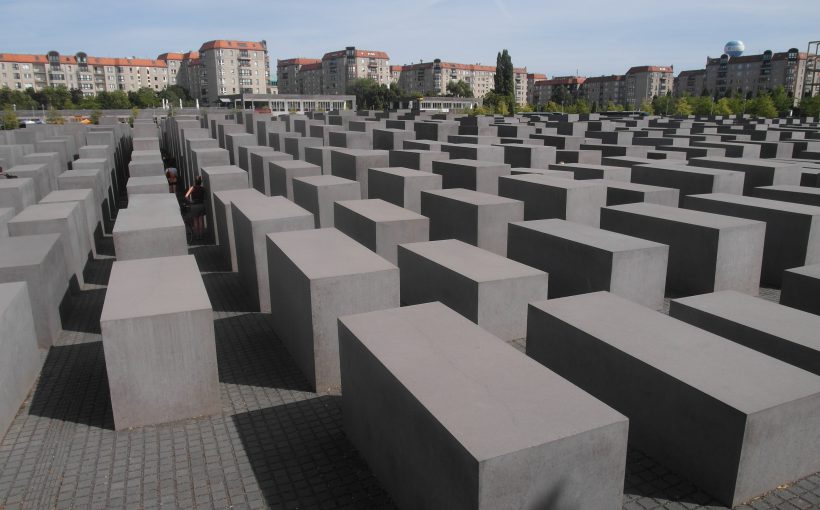 To commemorate the victims of the Holocaust a memorial was to be built in the heart of the German capital. Money was raised and an area found near Reichstag and Brandenburger Tor. Perfect but the bigger question remained. How do you honor the victims of one of the biggest atrocities in human history?

The public discussion at some stage was a disgrace and annoyed a great deal of people. At the end it was decided that the memorial should commemorate the European Jews that were killed during the holocaust. As a compromise a separate memorial for the Sinti and Roma was commissioned. Many people at the time thought that this was only the second best choice.

The problems and discussions didn’t end there. Especially Lea Rosh who first proposed the monument and was deeply involved in the realization didn’t make any new friends with this project. At some stage she was accused that she acted reckless and egoistic by dismissing suppliers without consultation and most of all her idea to bury a tooth found in a Konzentration Camp Belzec in one of the stelae finally led to her being dismissed from the project management. But we are jumping ahead here.

Luckily the first drafts for the monument were dismissed. They were all rather boring and would have been misplaced at such a location. Against all odds – and I am saying this because we are talking a sensitive subject and a conservative government making a decision here – they went for a proposal by Peter Eisenmann and sculptor Richard Serra; both from New York. They came up with a rather brilliant solution to the question of How to honor the dead. Peter Eisenman erected a total of 2711 slightly inclined concrete stelae in various sizes that are spread over an area of 19.000 m². They form a raster of paths so people can walk through the memorial and discover the various aspects and angles. Because of some changes to the initial design Serra later dropped out but he still deserves a lot of credit.

The proposal was – and if you look at picture you will understand why – met with a lot of criticism at the time. It was abstract and needed explanations. However, it turned out that the common people, visitors, locals and tourist, quite like it. It may look weird at first but you get in touch with the monument; literally. It isn’t another fancy statue, wailing wall or pretentious museum. It simply is different.

Personally I think that this is one of the best monuments of its kind. It’s not photogenic but it is real. You can touch the monument and it can touch you. For this reason alone it is brilliant.

FACTS ABOUT THE HOLOCAUST MEMORIAL: