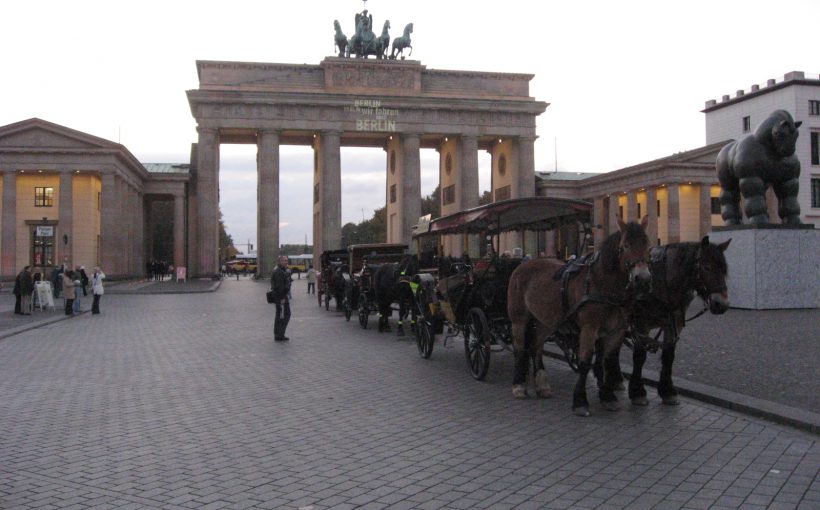 The Brandenburg Gate (Brandenburger Tor) is one of the national symbols of Germany. It is a neoclassical triumphal arch, built in the 18th century. It sits on top of the famous boulevard Unter den Linden pretty much next to Reichstag, Pariser and Potsdamer Platz.

It is the last remaining in a whole series of buildings that once literally served as city gates. Back then Berlin was considerably smaller. The Brandenburg Gate was not part of the fortification though but one of 18 gates within the Berlin Customs Wall.

The Brandenburg Gate was commissioned by the Prussian King Frederick William II. It was meant as a symbol for peace although the formal vocabulary suggests it meant peace as it is granted by a victor. The architect was Carl Gotthard Langhans. It was built from 1788 to 1791.

The gate suffered severe damage in World War II and was fully restored between 2000 and 2002. During the cold war this could not have been done since it was right next to the Berlin wall and inaccessible.

Its importance is more symbolic than anything else. As much as it was a symbol of the division between the two Germanys it – after the reunion – became a symbolical gate between East and West Berlin and national symbol for the reunification. The celebrations of this historic event took place at the Reichstag and right here.

The Gate’s design is at least inspired by the gate to the Acropolis in Athens (Propylaea). Germany at the time was in love with classicism (namely ancient Greece and to some extend Rome). It still pretty much looks the same.

The Brandenburg Gate consists of twelve Doric columns. Since it is supposed to be a gate, these columns were grouped – six at each side – with a wider passage in the center. For pedestrians there are two passages at each side that are rather narrow. On the gate sits a Quadriga. It represents the Roman goddess Victoria driving a chariot drawn by four horses.

It was Napoleon who first used it as an Arc de Triumph for his triumphal procession after the victory at the Battle of Jena-Auerstedt. It probably inspired the famous Arc de Triumph in Paris which was built the same year (1806). Napoleon also stole the Quadriga. 10 years later, after Napoleons was defeated in 1816, it was brought back. The original oak leaves were replaced by an Iron Cross which became the new symbol of power for the Prussian monarchy.

Needless to say that the Nazis loved the Brandenburg Gate and the symbolic power it represents.

Since 2002 it is fully restored and refurbished and is open to the public again. Together with Pariser Platz it was closed for traffic and turned into a pedestrian zone. It is one of the most popular locations for events like New Year’s Eve or as backdrop for events like the Berlin fashion week.

FACTS ABOUT THE BRANDENBURG GATE: