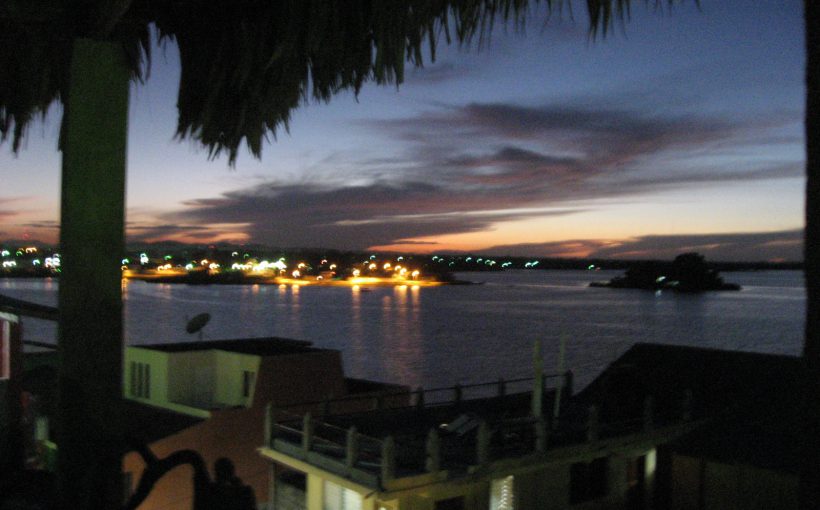 The biggest attraction of Flores and the very reason most people come her is it’s proximity to the famous Mayan site Tikal. Flores is the gate to Tikal. I tend to disagree. Flores is beautiful enough on itself and not just a starting point to the Mayan sites north of it.

Flores is situated on a small island in Lago Petén Itzá. It’s connected to Santa Elena on the mainland via a dam. It’s an easy walk. The village is build on a natural hill. You get great views over the lake that is surrounded by green hills. The narrow streets are lined with colourful houses, most of them being shops, restaurants and hotels though.

On top of the hill is the twin towered cathedral, a little square with trees and a basketball court. In the corner is a little bar where you can sit under a tree and enjoy the view. Loads of birds are flying around and entertain you with their chatter.

The atmosphere in this village is chilled out and although it is a bit touristy you just feel comfortable. People speak enough English for you to get along and it’s not even expensive. You’ll find accommodation for under 10 USD, a cheap meal in one of the restaurants costs no more than 5.

Santa Elena on the mainland is the twin city. It is a lot noisier, dusty and not pretty at all. Here you find even cheaper accommodation, banks and the bus terminal.

Flores was my first and only stop in Guatemala and I actually did go there to see the ruins at Tikal but it made me liking Guatemala so much that I will come back to see more. It says it all does it?

Great Tour from Flores to Tikal: You are picked up at the airport or your hotel in Flores. The day trip takes 8 hours and you see a lot:  More information and booking

Guatemala has a bit of a reputation in regards to kidnapping, bus hold-ups and robberies. The island of Flores is safe! The bridge is heavily guarded by military and police. Vehicles are due to random checks. The road to Tikal is fairly safe as well so no worries. I would still leave my valueables in the hotel.

Tikal – is one of the most important Mayan sites not just in Guatemala. It also is incredibly pretty. Highly recommended is the sun rise trip where you sit on top of a pyramid and see the sun rising over the rain forest with only the tips of the large temples peaking out in the foreground. You can’t do this on your won since the park is officially closed at that time of the time. An organised tour costs around 50 USD but it well worth’s it.

Actún Kan caves: The caves are easy to reach from Flores. Just walk cross the bridge to Santa Elena, keep walking straight up the street until it ends. There you turn left and follow the road until you reach the power plant, take a picture because it is hilarious, turn right and follow the path. From there the caves are signposted so you can’t get lost. From where you turn right it’s only another 5 to 10 minutes walking.

The caves are not particularly impressive or anything but they are nice. Legend says that a large serpent once lived there but I didn’t like that part to much. When you enter the caves now you’ll see things flying around. I checked it. They are actually birds not bats. I don’t know at night of course, might be a different story. The caves are well lit and there are a few interesting formations. The names given to them are colourful and most of the time I could not see at all. Some however are really cool.

You can also hire a guide a do the big tour, approximately 2 km through the mountain. Entrance is 20 Q. They also sell crisps and soft drinks. The guys running the show there speak very good English and are most helpful.

El Mirador, El Tintal and Nakbé: This is one f the things I did not get to do but I seriously will the next time I’m here. It is an at least 4 days hike through the jungle. It’s tough but apparently well worth’s it. You can book an organised tour in Flores or do it independently. For the latter check with tge Comité de Turismo in Carmelita. They can arrange mules and guides.

Info: When I came here from Belize the bus stopped at a gas station in town from where we went on a mini van. A travel agent brought us to an ATM first – the one on Flores only accepts certain cards – and then dropped us at Calle Unión. That was convenient since this is where the best hotels are situated. He would also ring up places for you and check if they got vacancies. He will offer you to book a trip to Tikal but you might want to shop around a bit. There is a number of places that offer the sun rise tour.

I personally quite liked Dona Goya 2nd, formerly known as Casa Aurora. The rooms are OK and very clean. They all got a tele and fan, some have air conditioning as well. Upstairs is a sun roof with loads of shade and hammocks. The nicest rooms have lake view (rooms 10,11 and 12). A double room costs 180 Q for two people (with air con) and 120 Q when you are alone. The other rooms are cheaper. They start at around 10 USD.

Casa del Lacandon is there as well. The cheapest place to crash they had was in a dorm for 50 Q. They have single and double rooms as well, some of them with a great view.

La Union looked pretty nice. I didn’t ask how much the rooms are. They did look OK and should be the same price as all the other places. For a single you will end up paying around 11 USD. La Union has a good internet cafe in the ground floor. They got decent computers and pretty fast internet.

All 3 places are more or less next to each other on Calle Unión.

La Luna seems to be the number one restaurant in town. It’s in the Calle 30 de Junio, you can’t miss it. The whole restaurant is just really pretty. They also have a nice little courtyard where you can sit. The food was quite good and the service outstanding. It seems slightly more expensive but that’s still cheap. Thumbs up!

Casa Amelie in Calle Unión; slow service but good food. Prices are reasonable. You can sit inside or on the balcony, they also have a few tables on a little thatched wooden terrace on the lake. It’s really beautiful and sometimes there is live music on.

El Grande Jacal in the Calle Centro América, good place for breakfast. Pancakes and omelette for example are quite nice. The music was awful though.

Hacienda del Rey was recommended in my guide book. I wasn’t impressed though. At least I couldn’t find the “seriously cheap breakfast” on the menu and what I did get completely failed to impress me.

There is a daily bus from Chetumal in Mexico, that goes via Belize City. The bus is surprisingly cheap but not particularly “modern”. Exiting Mexico will cost you 100 Pesos, in Belize you pay another 15 USD. The bus leaves 5 AM at the bus terminal. The whole trip will take about 9 hours. The whole thing works the other way around as well. A mini van will pick you up at your hotel and bring you to the bus.

In Flores you can book a bus tour to Palenque. Booking through a travel angency turned out to be cheaper than at the bus terminal. The bus will pick you up at your hotel. The whole trip takes about 8 hours. The small bus (that doesn’t really deserve the name) will take you to the border. From there you go onto a boat that will bring you to up the river to Chamoan. From there it is another 3 hours in a mini van. The procedure in Chamoan is somewhat confusing. Just keep saying Palenque. That worked for me.

This should work the other way around as well. The mini van to Chamoan leaves from Av Nicolás Bravo around the corner from Allende. It might be a good idea to book this trip in a travel agency.