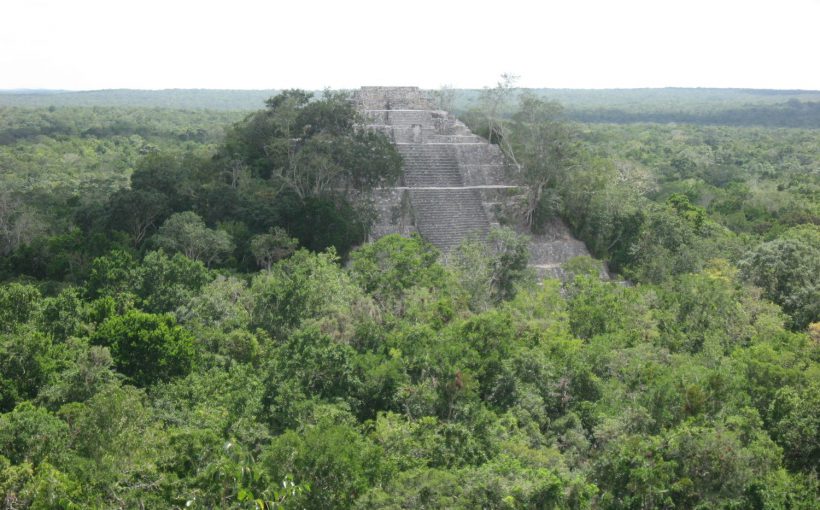 Calakmul is one of the largest Mayan sites in Mexico. Despite its size only few people visit it and of course there is a good reason. It’s in the middle of nowhere and I mean literally. It’s not just off but far off the beaten track.

Personally I think it is one of the most interesting sites to visit and an important part of the cities charm is its isolation. It may not be as impressive as Palenque or Chichen Itza but with a little bit of luck you’ll have the site to yourself and that’s ultra cool as in sub zero.

Getting there: The site is situated in the Calakmul Biosphere Reserve. It can only be reached via a narrow road through the jungle. The site itself is about 60 kilometres south of the busy Highway 186. The closest city would be Xpujil and it takes two hours from there. There are no public busses and no organised tours from Francisco Escárcega or Xpujil . It appears that you can book a trip from Campeche but that’s 300 kilometres away. You better think twice! You best get there from Chetumal with a rental car or Xpujil with a taxi.

A brief history of Calakmul

We know surprisingly little about Calakmul especially taking into consideration that it was one of the most important players in the Mayan world and well known as the archrival of the mighty Tikal. The reason again is its location in the middle of the jungle. It was first discovered in 1931 followed by an expedition in 1932 but then a long period of inactivity followed. Proper archaeological research only started in the mid 1980ies.

The site was occupied from Middle Pre-Classic period (1000-400) up until the Late Classic. The city covers approximately 70 square kilometers and it is estimated that it had a population of about 50.000 during its heydays. That makes it one of the largest Mayan sites ever discovered.

The name translates as “City of the Two Adjacent Pyramids” and is modern. In the Classic period it was most likely known as Kaan or the “Kingdom of the Snake”. Unfortunately most of the structures are made of the rather chalky local limestone and that includes most of the stelae. They are hard if not impossible to decipher and explains to a certain extend why we know relatively little about the place.

The two largest structures in Calakmul (I and II) date back to the Pre-Classic so we must assume that the city by then was relatively large already. Both pyramids are quite impressive but from what we know Calakmul did not play any important role at that time. Around 500 AD kingship was introduced in Calakmuls and only then its ascension to a super power of the Mayan world begun. Within a few years it became one of the most powerful centers of the southern plains.

Such a development had to attract attention and so it did. The – at that time -dominant super power of the Southern plain was the mighty Tikal and it is likely that they weren’t particularly happy about the recent development. Still they did not attack their rival but waited for them to make the first move. It seems strange but is not untypical for the Mayans. It retrospective it was a mistake and the rulers of Tikal were about to find that out the hard way.

The first incident happened in Naranjo. The city was controlled by Tikal but when a new king had to be appointed in 546 it was Calakmul who managed to establish their candidate. From all we know Tikal did not respond to the interference with their business as if it had other things on their mind. However, when in 561 the same thing happened again (in Los Alacranes) Tikal had to respond. It came to the long anticipated clash of the titans and Tikal suffered a devastating defeat. Calakmuls victory was so overwhelming that they could even install a puppet king there and it took Tikal over 100 years to recover from this blow.

In the mean time the rulers of Calakmul created their very own empire. They won allies, installed vassals and attack former allies of Tikal like Palenque . By 636 Yuknoom became king of Calakmul. He was later called “the Great” and under his rule Calakmul reached its apogee. It ruled a huge empire. There literally was no one in the southern plain that could challenge them and who ever dared to do so paid the ultimate price.

In 648 Tikal started to seek independence and again was defeated by Calakmul. As a result Tikal was politically isolated and completely powerless from a military point of view. It remained so until Yuknooms death but – and that is a peculiar fact – he in fact had not defeated it. He didn’t bother and this turned out to be a huge mistake. Only nine years after his death in 686 his very own son managed to lose a decisive battle near Tikal and in the years that followed the whole empire.

The rulers of Calakmul had made the same mistake with Palenque. By not securing their victory they left the door open for them to not only recover but emerge stronger than ever only shortly afterwards. Why they did it remains a mystery.

With Yuknoom Yich’aak K’ak, son of Yuknoom the Great,the decline started and it did not take long until Calakmul vanished from the political map. One by one Tikal conquered the cities allies and this way regained its old glory. Calakmul remained occupied until at least 909 (most likely much longer) but never recovered.

There are literally thousands of monuments in Calakmul spread out over an area of 70 square kilometres. It is needless to say that as a visitor you would focus on the central parts of the excavation. It can be broken down into two sections: Central Plaza and Grand Acropolis. Quite frankly, the spectacular part is the Grand Plaza and if you have little time stick to that.

I don’t want to go into much detail, only point out a few features. Structure VI on the west side of the Plaza is quite interesting. It is carefully aligned with Structure IV on the opposite side. The two together represent what Mayans called an “E group”. Standing on Structure VI and assuming that you are at the right time you would see the sun rising behind Structure IV/A on the summer solstice, behind IV/C the winter solstice and behind Structure IV/B both equinoxes.

That certainly is interesting but neither particularly unusual for a Mayan site nor particularly impressive. Because there are loads of trees in the way you see next to nothing anyways. Let’s move on therefore and check the good stuff.

Structure II is the second highest in Calakmul. It’s massive and what’s visible when standing in front of the pyramid is not even it. What you see is only Structure II B. It was built on of the terraces of Structure II. When you climb up there you’ll see that there is a pyramidal complex behind it that is even higher.

Archaeological research determined that Structure II B contained nine rooms with loads of hearths, a sweat bath and – among other things – an altar and tombs. Apparently the tombs were emptied at a later stage and reused for an individual that was buried there. Archaeologists found bone artefacts and ceramic vessels there. The interior is no longer accessible so don’t get too excited about it.

I was told that you can see El Mirador in Guatemala from the top of the pyramid. I believe it since Guatemalan border is only about 30 kilometres away, still I couldn’t find it. It is a bit like to be looking for a needle in a haystack but good luck with it. El Mirador is one of these places I’d really like to visit but it is one hell of a trip and I’m too unfit for it.

Talking about unfit; if you think climbing up mountains or pyramids for that matter is exhausting and pointless make an exception here. The view from the top is magnificent. You get a perfect shot at Structure I (the tallest in Calakmul) as it is rising above the jungle canopy. The second thing you realise when up there is that you literally are in the middle of nowhere. Calakmul is surrounded by thick jungle as far as the eye can see.

After seeing Structure I from the top of the pyramid you will want to climb it. It is the tallest building in Calakmul after all. When I stood in front of it I thought it looks a lot smaller than Structure II. It is a lot less “in your face” big one could say. I hesitate to call it fragile but in comparison to Structure II that is the impression you get.

The view again is awesome. I personally prefer the one from Structure II but I would climb them both.

There are three different walks depending on how much time you got, pick the one that suits you best.