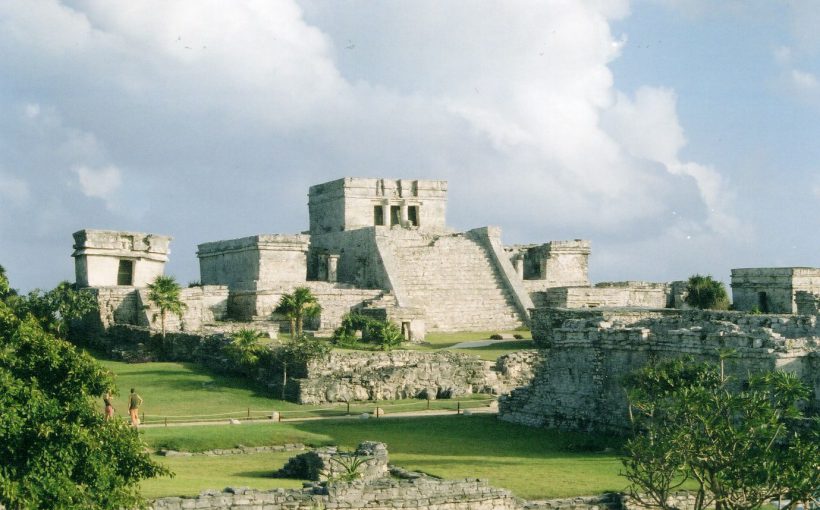 Tulum is one of the busiest per-Columbian Maya sites in all Mexico. Only Teotihuacán and Chichén Itzá list more visitors and they are both huge. Why is that you may ask? After all Tulum isn’t a particularly important site and not all that impressive either. Of course there is a perfectly good explanation and so I shall enlighten you.

The site is conveniently located at the beach and near the popular tourist destinations Cancún and Playa del Carmen. Even people that normally are more interested in sunbathing than exploring the Mayan heritage pay a quick visit to Tulum. It doesn’t get any easier. You have to admit; going to Yucatán without visiting at least one Mayan site is like going to Egypt without seeing the Pyramids.

Tulum is a rather small site in the first place. It also is an easy enough daytrip from the nearby resorts and last but not least; the nice and sandy beach makes it a lot less painful for philistine to salve their conscience. I admit it is a theory but still the most likely explanation for Tulum being so busy.

The name literally translated means “walled city”. The original name most likely was Zama – The city of Dawn. From what we know the city was an important centre for the worship of the Descending God. This theory is also supported by the alignment of the buildings. The site – figuratively speaking – opens towards the sunset.

As the name suggests Tulum is surrounded by a wall. There is no question that it served defensive purposes against a possible invasion. That doesn’t mean it was built as a coastal fort. It originally served as a port for nearby Coba. Nearby admittedly is relative on this occasion. Coba still is about 60 kilometres away. At its height Tulum was also one of the most important trade hubs in the Mayan world.

The site dates back to the 6th century but most of the structures in Tulum are from the Post-Classic Era. Pretty much all the buildings you see today would therefore be built between 1200 and 1450. The place was finally abandoned in the 16th century.

Quite a few of the buildings have mural paintings on the inside. Unfortunately they are closed to the public. This practise is pretty common these days. It is impossible to protect for example fresco murals from vandalism. You’ll find graffiti in the most impossible places. It is a pity but to be honest I can’t blame them for simply closing the interior to the public. Otherwise the remaining parts would be destroyed within a few years.

It is more than likely that the buildings were similarly decorated on the outside. The Temple of the Frescoes is particularly interesting in that prospective. The corner column clearly resembles a face and gives you a nice little impression how this place would have looked like in the old days.

FACTS ABOUT THE MAYA SITE TULUM: