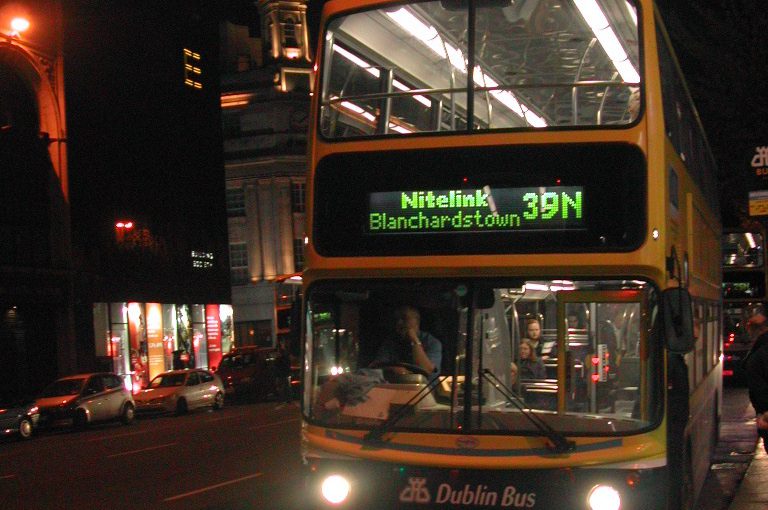 Although the capital of Ireland is said to be one of the richest cities in the world, Dublin’s public transport system is among the worst in Europe. Public transport relies primarily on busses. Rail-bound means of transport are rare. The suburbs along the coast are served by an aging suburban train called DART, which is notorious for its slowness and congestion during rush hour.

In 2004 the first two tram lines were opened in Dublin. The system is called LUAS. It was celebrated at the opening as a new, ultra-modern means of transport. However, LUAS is just a normal tram, which in many places in the city centre has no route of its own and is therefore rather lame. After all, after many years of construction, the lines are finally connected.

The DART runs to the suburbs of Dublin along the coast. In the south it extends to Greystones, in the north the line outside Dublin divides into two lines. One goes to Howth, the other to Malahide. Although the means of transport is at most a slow train by Central European standards, as a tourist you should take a trip with the DART. Especially the route to the south, along the green cliffs, is an experience for railway romantics. Beside the DART there are also local trains, which, similar to an S-Bahn, go to the suburbs of Dublin. These lines are mostly not electrified (diesel locomotives). The suburban trains and the DART are operated by the same state company.

Busses go almost everywhere in Dublin and are still the heart of Dublin’s public transport system. In the city centre it is almost exclusively double-decker buses. The best seat is at the top in the first row, practically above the driver. Caution: Because of the left-hand traffic in Ireland, buses stop at the “wrong” side of the road. There are hardly any information desks, the notices are confusing. But the drivers of the buses are usually very helpful.

To a foreigner (actually to locals as well but they got used to it) the fares system can be really frustrating. A big problem is that the DART, LUAS and buses are independent companies. Most tickets are only valid for one of the means of transport, information about connections is not available.

For the LUAS and the DART there are ticket machines at the bus stops, for the buses you pay cash to the driver. Watch out: If you don’t have the right fare, you will get a voucher instead of the remaining money. In theory you can exchange them for cash in an office of the bus company. If – like most people – you can’t be arsed to go to this office, the money is lost.

In the buses, the fare depends on the distance, the price system is very complicated. Around midnight at the latest, the busses stop. Night buses only go on weekends. In addition, a night bus ride costs 6.60 euros. In the so called Nitelink buses, one can only pay with coins, thus one cannot even pay the 6.60 euros with a 5 euro bill plus coins!

But there is also good news about Dublin’s public transport: if you are a tourist with accommodation in the centre of Dublin, you may not need public transport at all. The centre is not very big, you can easily walk between the sights and shopping streets. Between Dublin Airport and the city centre there are many buses that are not too expensive.

Those who are not familiar with the area should always head for O’ Connell Street. Here you are right in the centre, almost all bus lines from Dublin and the red line of the LUAS meet here. There are enough taxis in Dublin, the fares are slightly higher than in other places but the taxi drivers are usually honest and drive unsolicited with a taximeter.

Stop names, signs and announcements in Dublin are increasingly bilingual in English and Irish. Especially the complicated place names and street names in the very foreign sounding Irish language do not make orientation for tourists any easier. This may satisfy the nationalistic feelings of some Irish people, but it doesn’t really have a practical meaning. There is hardly anyone in the country who can speak better Irish than English.