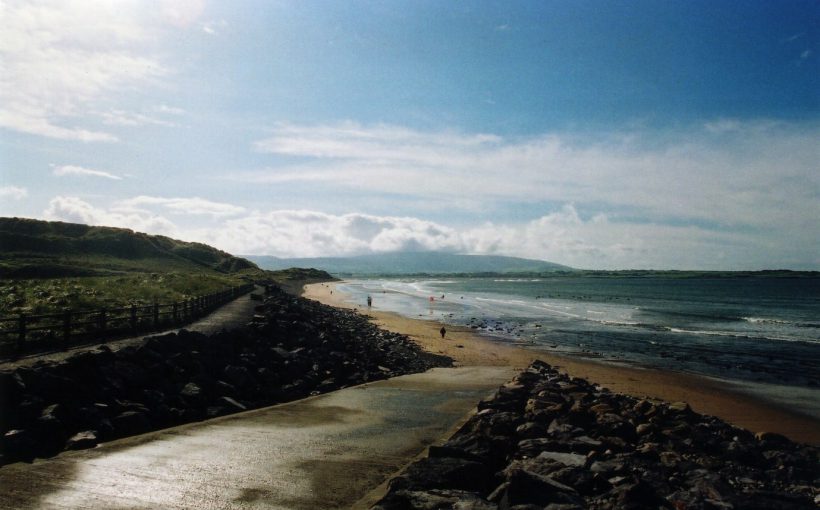 Sligo (Sligeach) is a town on the Irish West coast. It is part of the province Connaught and capital of county Sligo. The Irish name Sligeach means “place where there are many mussels”. The area was apparently well known for shellfish. Sligo itself was founded by the Vikings.

The town is the biggest urban centre in the northwest of Ireland, although that’s not saying much. With only around 18.000 people living there, most of us would not consider it particularly big. Sligo itself doesn’t even have much to offer but of course there are couple of very good reasons to come here. We’ll get to that.

Sligo is a gateway to Donegal and Northern Ireland. The N4 – coming from Dublin – is one of the major arteries in the countries road network. The town is part of the national rail network, has a port and even a small airport. That’s not bad for a small town. None of this matters though if you travel with a backpack. So why would you come here?

Carrowmore is a megalithic site on the Knocknarea peninsula only a few kilometres from Sligo. It consists of around 30 megalithic tombs. It may not be as impressive as Bru na Boine but it is cute. There is a small visitor centre. Admission is pretty cheap though. I’d give it a go and let it be for the view alone. It is spectacular.

Another attraction is Rosses Point. It’s cute and has a small beach where you can actually swim. It is more of a family destination. And honest to god, who goes swimming in Ireland. It’s freezing.

If you need a little exercise give Knocknarea Mountain. You can’t miss it. The peninsula is dominated by it. You get an awesome view from there. There is some sort of burial mound on the summit. The hill is about 300 meters high so it’s not a climb more like an easy walk up.

Quite impressive is Glencar Waterfall some 15 kilometres north of Sligo. Simply follow the N16. It is a tranquil location right next to a beautiful lake. It is relatively famous at least when you are a fan of William Butler Yeates. The famous author – who lived and died in this wonderful part of Ireland – mentioned it in his poem “The Stolen Child”. If you are an impatient reader you might wonder why anyone would go to Sligo. Well there is something I haven’t mentioned yet. Sligo is a hotspot for surfers. I know it sounds wrong but it is all true. Strandhill right next to Sligo has a fantastic surf beach. The waves here are almost perfect (except for the water temperature). As a result the place is packed with people in wetsuits.

If all you ever wanted is surfing with the penguins (metaphorically speaking) then you may want to think about setting up camp here. Rumour has that when a few years ago a nasty storm was approaching the Irish west coast with massive waves up to 12 metres they got phone calls from as far away as Australia if the waves are really that high. They considered getting on to a plane and coming over. These people are obviously insane.

On most days the waves are somewhere in between beautiful and perfect. I may not be a surfer but I do recognise a good wave when I see it.

There are countless B&B’s in Sligo and Strandhill. I cannot recommend any of them since I never stayed there. I know of two hostels in Sligo. There is the White House Hostel on Markievicz Road and the Harbour House in Finisklin Road. The latter is also known as the Sligo International Tourist Hostel.

If you come here to surf consider staying in Strandhill directly. The hostel wasn’t particularly good when I stayed there but now gets pretty decent reviews. They must have improved significantly. The only other explanation is that I stayed in a different hostel that no longer exists. The place to stay – according to the feedback I got – is: Strandhill Lodge & Hostel (Shore Road)

If you are relying on public transport; Bus Éireann operates busses from and to Dublin, Galway and Belfast. It certainly is the cheapest way to travel in Ireland.

Quicker and more comfortable is the train. It takes approximately 3 hours from Connolly Station in Dublin. Check the prices in advance and consider a return ticket.

Aer Arann operates one or two flights a day from Dublin. Since they got into some difficulties recently so you may want to check this in advance.