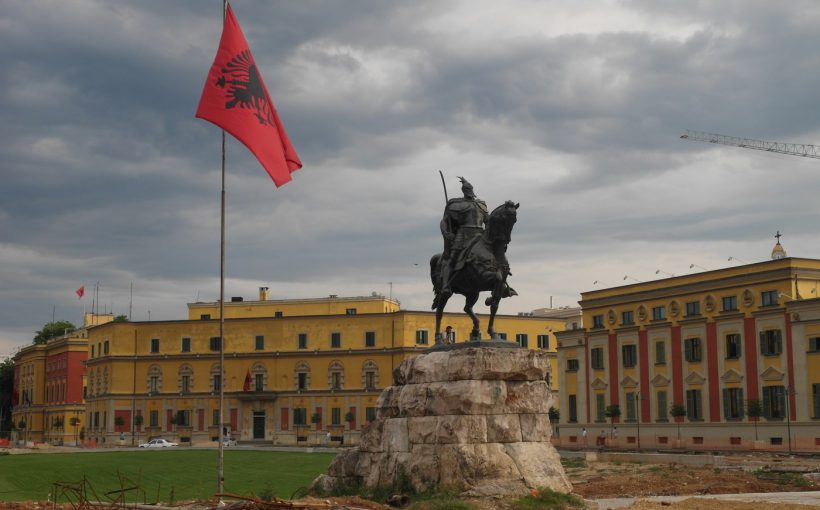 Albania is one of the Balkan countries and situated in South East Europe. I’d consider it one if not THE hottest insider tip in Europe. It is wild, more or less unspoiled, exotic, crazy and still about 20 years behind the rest of the world. While Albania does have a bit of a reputation I found it quite safe to travel. It’s not always easy to get from A to B but that is part of the appeal. It is also one of the last remaining countries in Europe that is dirt cheap to travel. If on a tight budget you will LOVE Albania.

Albania shares borders with Montenegro, Kosovo, the Republic of Macedonia and Greece. It also has along and beautiful Adriatic coast. Since it is not part of the EU yet you do require an entry visa but you can get this at the border with no difficulty. The official currency is Albanian Lek (ALL). The exchange to the Euro is somewhere around 140 Lek to 1 Euro.

I barely ever get excited about a country but with Albania I do. It really is something special. Although technically communist Albania has had no real ties to the Eastern block. It was isolated. Their local version of a dictator was considered nuts even by the  Eastern Block Communists. To illustrate what I mean; when Enver Hoxha rose to power he promised his fellow country men that never again should any nation invade Albania. So he ordered to build bunkers all over the country. I mean Albania wasn’t just poor at that time. It was a third world country. They had no infrastructure, no roads, not enough to eat and this guy devotes all available resources to build bunkers in case someone wants to invade the country? You’ll find these bunkers literally everywhere. There are an estimated 750,000 bunkers in Albania!

The locals told me that they had to do an annual bunker duty. They would spend a month or so minding that thing. Women were relieved of bunker duty when pregnant otherwise they had to do it as well. Music was barred, religion was banned, one bottle of wine per year was granted by the government. It wasn’t the jolliest of places I imagine.

I was told that the chances of going to jail were pretty good there. And we are not talking about for what you and I consider a crime. As the locals put it; you don’t want to work, you go to jail, you want to sing a song, pray or crack a joke? Jail. Even if they did exaggerate a little I tend to believe what they said. Albania must have been a grim place to live. The people though are great. Friendly, hospitable and generous.

There are many stereotypes about Albania. Although I generally disagree with them there is a reason for their existence. The Albanian mafia is real and yes many Albanian immigrants around Europe have been involved in criminal activity or at least got the blame. That doesn’t mean all Albanians are gangster. Quite the opposite. It could well be that they simply don’t export their finest. The good and honest people might just stay home. Of course I don’t know that. What I can say is that in Albania I never had a bad feeling and nothing went missing. I felt absolutely safe in Albania.

Since we are on the subject though; what I did notice is that an estimated 75% of all cars driven in the country are Mercedes. Many of them are ancient but it does make you think. How many of these are legal imports? Let’s put it this way: I didn’t see many Mercedes dealerships in the country. Amd when I asked the locals they either laughed or shrugged.

One story they did tell me goes like this: An Albanian Public Order Minister was going to Greece for some official consultations, Of couse he was driving in a Merc. On the border the Greeks out of habit run a check on the car and – believe or not – the car was reported stolen. How embarrassing is that? The Public Order Minister drives a stolen car? Only in Albania.

Albanian society is pretty macho or so I was told. I’m no girl so I don’t know if that would affect your travels but I don’t think so. I never had as much as a bad feeling while traveling around. Quite the opposite. Despite communication problems I found the locals to be very keen to help. They may not have much but they make the most of it.

There are some pretty astonishing beaches in Albania that are totally undeveloped. It’s difficult to get there but it’s worth it. In most other Mediterranean countries you will have trouble finding a long sandy beach without a hotel in the back. In Albania it’s the other way around.

What most people don’t know; Albania could be rich. It has oil. I was told the oil field we passed is the biggest on shore oilfield in Europe. You can literally smell it. What makes the thing very Albanian is that a) they still import there petrol and b) the road to the oil field is god awful even by Albanian standards. The trucks do something like 5 kilometers an hour because the road is dotted with massive pot holes. When I was there it was dry. I’d actually like to see it when it rains.

Getting around can be tricky. They are doing a lot of work in the south but the infrastructure is a nightmare. There are buses but traveling is time consuming. In the south east the road network is pretty good but that’s about it.

There is international airport in Tirana but quite frankly, I’d rather walk than taking my chances with Albanian air traffic control.

If you com from Montenegro you may find out that they have a little scam going on there. The only bus from Ulcinj to Shkoder is 8 AM. Instead of spending the nigh you can take a taxi. We payed 20 Euro which considering the distance is fair. If you travel alone try to hook up with someone. The price is for the car not per person.

From Shkoder there are official buses or – much more frequent – semi legal minivans to Tirana.