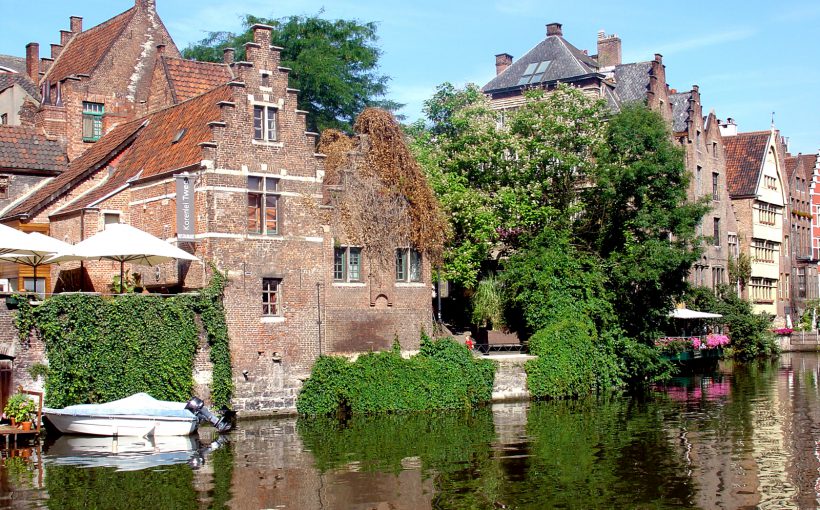 Ghent (Gent) is the capital of the province East Flanders. It is situated in the northern half of Belgium. That’s the Flemish part of the country meaning, people speak Dutch (and excellent English for that matter).

Ghent is unique for a number of reasons. It is as beautiful as the much more famous Bruges but not nearly as touristy., while much more chilled out than Antwerp and Brussels but with all the conveniences of a city including a decent night life. It is reasonably cheap to travel and due its location a perfect base to explore the Flemish part of Belgium. If you only got time to visit one place in Belgium: Ghent is the place you want to go to.

Ghent is a big city. Almost 250.000 people live here. The thing is; you can’t tell. Ghent may be a big city but it feels cosy. If you go there as a backpacker, you will probably spend most of your time in the medieval city centre. But it won’t get boring. The old town of Ghent is massive. Back in the 11th century Ghent was the second biggest city in Europe.

Second only to Paris in that time Ghent was an economical super power. It was the European centre for the wool industry. The demand for wool was so massive, it had to be imported from England and Scotland. The merchants accumulated such a wealth and power that they pretty much took over the governing of the city from the aristocracy.

They formed powerful guilds and when necessary even allied with foreign powers to protect their interests against the local sovereigns. At least for a while the merchants actually the upper hand but this period ended soon enough when Ghent fell under the rule of Burgundy.

The guilds opposed newly introduced taxes by the new ruler and raised an army. The rebellion culminated in the Battle of Gavere 1453. The city suffered a devastating defeat against the army of Philip the Good and had to accept higher taxes as imposed by the new ruler. The defeat had another effect; the city lost influence and a shift of power became apparent in the years to come. Ghent remained a powerful and important centre of trade but it started to lose its status as THE centre of the Low Countries to Antwerp.

Things to do in Ghent

Ghent was rich and you can tell by its looks. The guilds and wealthy individuals had money to spend and so they did. Looking down from the bridge Sint-Michielsbrug over The Graslei square you get an impression of what Ghent is all about.

One of the most prominent landmarks is the Belfry. It is one of three massive churches that dominate the medieval city centre. The Belfry is 91 meters high and dates back to 14th century. It served as bell tower and fortified watchtower but also held at times the treasury.

I just mentioned three churches. The other two are Saint Bavo Cathedral and Saint Nicholas’ Church. The very beautiful Saint Bavo Cathedral dates back to the 10th century. It is based upon the Chapel of St. John the Baptist. It was re-modelled a number of times though. The first time in a Romanesque style and from the 14th century onwards in Gothic style. The work was completed in 1569. There are some interesting bits of history to it but the main reason to visit the cathedral is the altar piece: “The Adoration of the Mystic Lamb” by Hubert and Jan van Eyck. It is indeed very impressive and generally regarded their masterpiece. Saint Bavo is also the seat of the diocese of Ghent.

Less elegant but quite impressive is the third of the three churches. Saint Nicholas’ Church next to the Korenmarkt was the church of choice for the wealthy guilds. They actually had their own chapels. They were simply added to the side of the church.

Another church worth seeing is Saint Michael’s. Highlight there is a painting by Anthony van Dyck.

An imposing landmark in the city centre is the castle Gravensteen. It dates back to the 12th century and was built with the crusader castles in mind that the principal count Philip of Alsace had encountered, when participating in the second crusade.

The castle wasn’t the first to be built in this spot. It “rests” on a predecessor that was probably built in the 9th century. In 1180 the original castle had been extended and the wooden structure replaced by stone. Finally a moat was added and a curtain wall.

The Counts of Flanders abandoned it in the 14th century and moved to a new residence. The castle was then used as a court house and later as a prison. By the end of the 19th century it was about to be destroyed but the city of Ghent opposed these plans, bought and renovated it. Today it hosts a torture museum. Gravensteen is one of the biggest examples of a castle with moat in Europe.

There are also three Béguinages in Ghent. They are pretty typical examples with a bunch of small dwellings surrounding a courtyard. If you are interested in the sisterhood and their history, give it a go.

If contemporary art is more for you, try the Stedelijk Museum voor Actuele Kunst in Citadelpark.

My favourite thing to do was wandering around town and enjoying the hospitality of the locals. Try some of the local specialties let it be chocolate, the various sweets, a variety of beers or why not try the sea snails. They do taste better than they look.

Unlike Bruges (Brugge) Ghent is not a museum. It is a lively city that happens to be just as beautiful as Bruges. It is a lot cheaper and certainly a lot less touristy than the tourist trap in the northeast. And if you want to see it anyways, do what I did: Go there on a day trip. It’s just over 60 kilometres to drive.

One of the best choices (value for money) is HI De Draecke Gent, Sint-Widostraat 11 although not everybody was happy there.

If you like it a bit quieter and you can afford to spend around 30-50 Euro I would recommend:

Casa Borsalino in Vlaanderenstraat 46 a short walk from city centre

I would strongly advise you to book in advance!