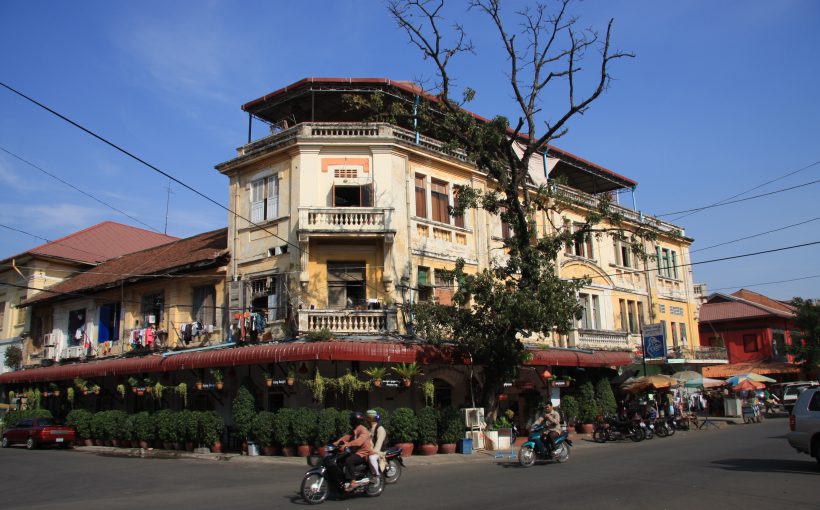 Phnom Penh is the capital of Cambodia. It has quite an interesting history and was more or less wiped out from the map during the regime of Pol Pot and the Khmer Rouge. It is wild and in many ways wonderful.

The city is a surprise in many ways. For a start it isn’t as bad as one would expect. One can still see the destruction caused by the Khmer Rouge but most of the wounds have healed or are about to. The place is quite relaxed for a big city.

The city is located along the river Tonle Sap. There also is a lake in the middle of the city. Around the lakes you’ll find the budget accommodation for the backpacking community. The area looks dodgy but is quite OK. The places vary. Most popular is No. 9 Guest house and indeed it has a good atmosphere and a lot of party going on but other than that the place is filthy and the rooms are so hot that it is almost impossible to sleep. In the narrow back streets you’ll find some incredibly charming bars and restaurants that make up for the lower standards of accommodation.

The biggest problem with this area is the fact that some government official sold the lake to a Korean investor. He decided to fill the lake with sand to later build on it. As a result there isn’t much left of the lake. One can still make out the old shoreline but it is a rather sad sight. My guess is that this filling up the lake resulted in mosquitoes and rats being pushed to the tiny area of lake remaining. This is not ideal for the budget places. In many ways they are rather cool. They are built on stilts an its a god spot for the sunset. Once they start building on the former lake this will probably change as well.

Most popular is the area along the river. There are fewer mosquitoes and more of a breeze. There is a wide range of places to stay. near the waterfront are most of the bars and clubs. If you do not like girlie bars it is a bit of an Odyssee if you don’t know where you are but there are plenty of good addresses. I quite liked “The Cavern”, another must see is the FCC. There is an air conditioned restaurant the bottom but besides a stairway leads up to the terrace bar. Along the stairs are fantastic photographs and the view from the top is spectacular.

Another area of interest is around the market near the Olympic stadium. This market by all means is a remarkable place. It’s also called the Russian market and a good place to buy clothing.

There are plenty of things in and around Phnom Penh. Most tours will include a visit at the Killing Fields but it’s a rather depressing site. Tuk Tuk drivers will also offer you a visit at the shooting range were you can fire an AK 47 (THE Russian machine gun) for around 40 Dollars or – and this rather bizarre – for 90 Dollar you can shoot a cow with a bazooka.

The Royal palace doesn’t actually worth seeing since only a tiny fraction is accessible. Charging people for it is a joke.

A lot more impressive is Wat Phnom but again you have to pay to get in. It only costs a Dollar but still; since you get a great view with going inside you might consider that. One thing you will then miss is the view. Wat Phnom is the highest point in the entire city.

Quiet pretty is the French quarter. Pretty might be the wrong word. It’s not in particularly good shape but the decay adds something. The best looking bit is probably the small square in front of the Post Office.

There are coupe of museums that display Khmer art and then of course there is Toul Svay High School. It served as a prison and torture chamber during the regime of the Khmer Rouge. It was later converted in to a museum and gives you an idea of what terror these walls have seen. It is quite depressing.

One thing to consider is the heat. Phnom Penh get’s boiling hot and on a bad day there is no breeze whatsoever. This could interfere with your sight seeing. It may not be a good start to your trip. It is better to acclimatise somewhere else.

At the lake or what’s left of it

I did not like No. 9 Guest house but will admit it has a lot of atmosphere. Much cleaner is it’s twin the Sister No. 9. It is more or less next door, newer and much cleaner.

The Drunken Frog another 20 m down the road is cleaner and better than No. 9 but lacks the atmosphere. Also the guys running it are a bit pushy.

All the places above are budget places. You will get a room for 3-5 Dollar

South of What Phnom

The Dara Raeng Sey is a rather big place. Rooms start at 8 Dollar, air condition costs 18 Dollar. The rooms are tidy and spacious. The place is a bit dull but the people are very helpful.

Okay Guest house is a charming place run by some very friendly people. The restaurant is quite good as well. The rooms are good, some have air condition.

The Sunday is a bit further away but compensates it with a lot of atmosphere. The rooms are quite nice. They also got free internet and a small but good restaurant. A room with air condition costs 15 Dollars.