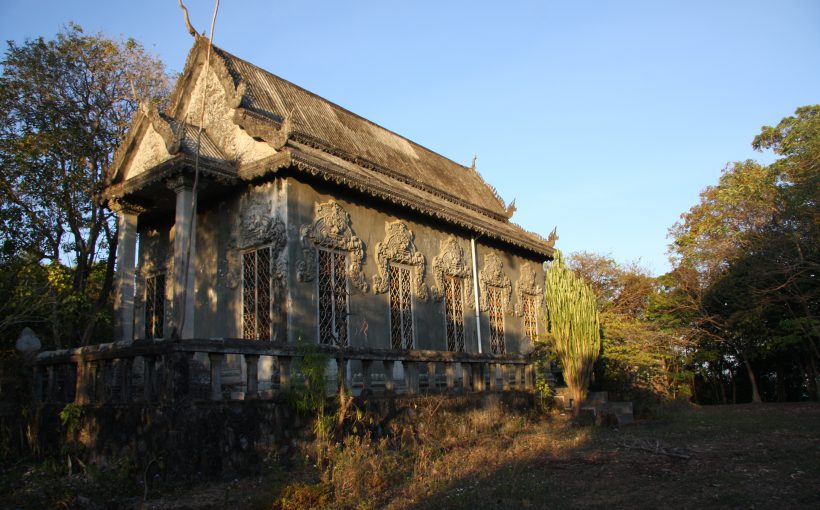 Long before Sihanoukville became popular as a sea resort Kep was Cambodias most popular destination for weekend breaks at the sea. One does wonder why. There isn’t a single decent beach in the village and Kep itself is rather small and unimpressive. It is at the sea and the area is rather nice though.

You arrive at the bus stop which is at the main square. It is peculiar place. Most of the square is taken up by shelters with hammocks. Other than that little is going on there.

The other point of interest is the Crab Market which again is rather unimpressive; interesting may be but that’s it. Crab seems to be the local speciality. At night and low tide people walk in shallow water hunting them. Surprisingly enough though crab is still rather expensive in the restaurants. Cambodian logic I guess.

One of the things to do in Kep is a hike around the hill. It is quite nice but also a bit funny. The best views you don’t get from the viewpoints. Everything is sign posted except for the bits that matter. One doesn’t really get lost but it is a rather long walk (about 8 kilometres I’d say) and for most of it you follow a road. It is not that spectacular either.

If you manage to find – the signs offered little help for most of the way – the sunset rock is a cool place to enjoy the sunset. If you stay there for the sunset bring a torch though. The last bit is a steep and narrow path through the jungle.

Other than that Kep is a good starting point for trips to the islands off the coast. They offer a Robinson experience and some great snorkelling. You can book a tour or talk to the fishermen directly. Prices depend on the destination. They start at 20 Dollars and go up the further you want to go.

The easiest way is the bus from Kampot. Kep is only some 20 kilometres away. If you don’t want to stay there (and one couldn’t blame you for that) simply rent a scooter from Kampot. There also is a direct bus from Phnom Penh.

There is some sort of club in the town centre. It looks a bit funny but might worth a try. I was knackered from the walk so I passed.

Harbour Guest House – very nice setting with a good view. 16 Dollar for a room with fan is a bit expensive though.

Kep Seaside Guesthouse – OK with clean rooms and friendly staff. It is directly at the sea coming from the town centre behind the Crab Market. A room with air condition is between 15-20 Dollar. The restaurant is quite good.

Vanna Bungalows – at the roundabout coming from the village turn right and up the hill. The view is spectacular and the whole place is rather nice. They have a nice restaurant and the bungalows are awesome.

Veranda Natural Resort – more or less next door from Vanna. Nice bungalows and an even better view. The hike around the hill starts just behind it.

The Beach House – in the centre right behind the beach. It’s rather expensive but the rooms have a nice view at the sea. They also got a nice pool and the whole place looks brilliant. Not the first choice when you travel on budget but certainly a great place.

There doesn’t seem to be an ATM in town. Bring cash!