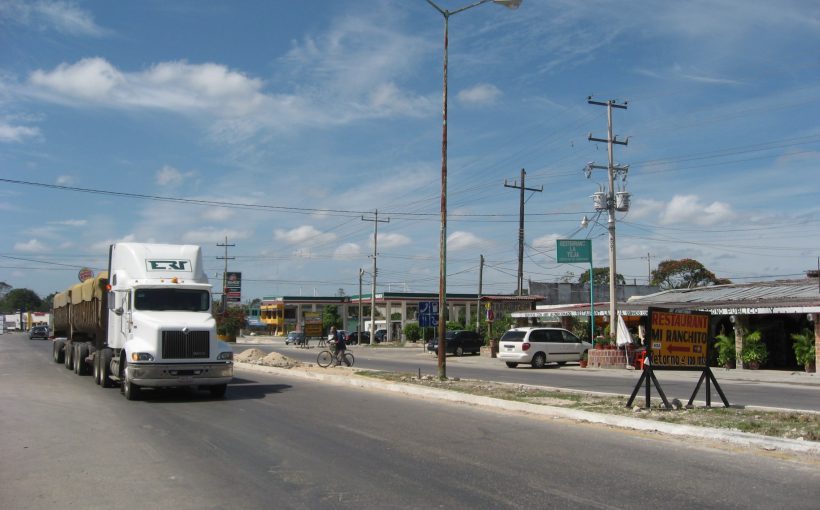 Francisco Escárcega is a major hub for people travelling east to Chetumal , north to Campeche or south to Villahermosa and Palenque. It is a dusty town in the middle of nowhere. There is no reason to stay here unless you are stuck as it happened to me. That actually seems to be the whole purpose of this town.

In the hotel they didn’t even ask how long I want to stay. It seemed quite obvious to them it will be one night only.

No matter how far you walk here it just doesn’t get any better. The main attraction is the busy highway. There are a couple of cheap hotels and restaurants, a few gas stations and even a Burger King but not even a car rental so it doesn’t even work as a plan B to go to Calakmul .

The town turned out to be a lot bigger than I originally thought. From the bus terminal the town seems to end within a hundred meters. I arrived late in the evening and I did get confused because the whole town was dark except the PEMEX stations and the two hotels near by.

The hotel (Ahkim Pech Hotel) was reasonably clean, cheap and close to the bus station. I has air conditioning, Cable TV and hot water. That’s all you ask for in a place like this. Since it is right next to the highway you won’t get a good nights sleep though. It’s across the street from the first PEMEX station, on the left side coming from the bus terminal. Walk west  on the road towards Villahermosa.

There are a few cheap restaurants. They are not particularly pretty but friendly and the food was quite alright. It makes no difference whatsoever where you eat. They are all similar. Pick the one you like best.

Buses to Xpujil – my original destination – are not as frequent as one could expect but you do get pretty much anywhere from here. The girl in the bus terminal was completely useless though. She first gave me the wrong departure time and only after the bus to Chetumal arrived admitted it actually does stop in Xpujil. She then even sold me a ticket which she refused an hour before. Of course she didn’t speak a word of English and with me being pretty useless with Spanish it wasn’t easy.

Francisco Escárcega – Waiting for the bus that gets you out of there.