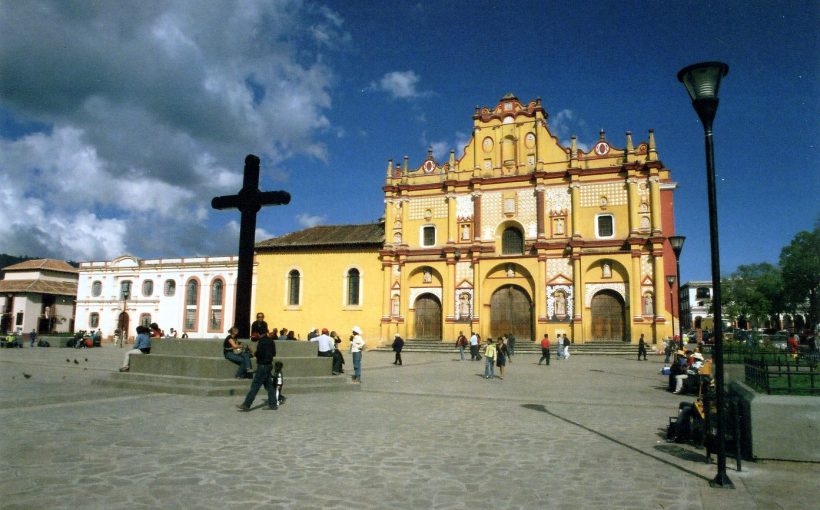 I went to San Cristóbal because an old Mexican I met on the bus from Guatemala recommended it. I had to think about it for quite a while. It sounded good but it’s a long way from Palenque. It’s not even that far but it is a narrow winding road up and down the mountains and it takes forever.

I never regretted my decision. The Mexican fellow was dead right. I fell in love with this place the moment I arrived. What a stunning beauty! I had not known what to expect but was overwhelmed. I only ever had this once and that was Nafplio in Greece. If you know Nafplio you know what I mean; arriving in a place and have this sensation where all you can say is: WOW.

San Cristóbal is situated a fertile valley surrounded by mountains. It is picturesque, vibrant, charming and it’s dirt cheap. My initial plan was to stay for one night only but I changed my mind quickly. There was a number of reasons for that but the decisive moment was when I discovered a Jazz Club. Although I was knackered from the the long drive I went in and oh lord. From a European point of view San Cristóbal is pretty much the end of the world but in this club I saw a guitar player that just blew my mind. I’ve never seen anything like it and I’ve been to a few Jazz clubs.

The town centre is colonial style with beautiful houses and loads of really cool churches. Most of the buildings are painted in bright colours but don’t look like much from the outside. The most beautiful parts are the courtyards. I’d call it Hacienda style.

It is like stepping into a different world. Many of these courtyards have columns and loads of flowers. They are painted in earthy colours and you just don’t know what to say. I went into a restaurant the other night and it was awesome. Back home the way I look like they wouldn’t let me into a place like this but here I was king customer. It was a huge patio, all painted in a warm orange, loads of plants and surrounded by columns. I was literally speechless and that doesn’t happen often. On top the food was really good and with 98 Pesos for a Filet Mignon anything but expensive.

The best thing to do in San Cristóbal is just walking around. The narrow streets with all these gaudy buildings are beautiful. It’s easy to get and lost and I mean it in a good way. I spent all day roaming the streets. Thank god for the digi cam. I took hundreds of pictures because everything looked so beautiful. From a photographers point of view the city is a nightmare though. It’s very difficult to get a good angle and especially with the most spectacular buildings there is always some sot of obstruction that prevents the perfect picture. Even the postcards they sell prove that. If the pros can’t do any better than this what am I supposed to do?

The DaDa Club – excellent Jazz club Av. Insurgentes not far from the main square. Live music every night. The musicians are surprisingly good and not just for being in the middle of nowhere. The place rocks! Beer is reasonable and they also serve snacks. In the entrance area is some sort of café with WLAN access. Don’t get confused.

I stayed in Posada Media Luna. It’s in Hernando Domingez. From the bust terminal walk up Av. Insurgentes for four blocks and then to the left. The place is beautiful, the rooms are large and spotless, it has Cable and free Internet (WiFi). With 200 Pesos a night for a single it is a fairly good deal as well.

There are loads of places in that area and you can get it a little bit cheaper. I liked the location and the people that run the place.

Another great place is Posada Los Morales. Walk up Hernando Domingez past Posada Media Luna until you hit Ignacio Allende. There you turn right and walk one more block. It’s not far away. The location is awesome. The have cottages for rent that are on a hill side. You get a brilliant view over the town centre from there.