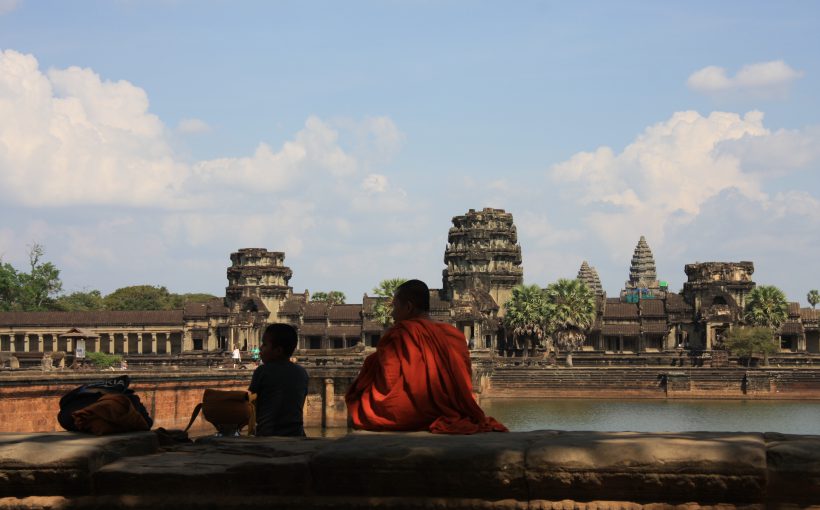 The kingdom of Cambodia is part of South-East-Asia and the lower Mekong subregion. It borders Vietnam in the east, Laos in the north and Thailand in the west. The capital is Phnom Penh, the official language Khmer.

Cambodia has an area of 180 000 km². Geographically it is dominated by the large lake Tonlé Sap (literally translated Large Fresh Water River but more commonly know as Great Lake) and the river Mekong. The country is mostly flat with a few mountains up north (Rattanakiri) and a few hills in the area around Kampot.

Cambodia is considered one of the most corrupt countries in South East Asia. That certainly is true. In parts it is also a lawless and a bit dodgy. Most of the time this won’t affect visitors to much but a bit of precaution will do no damage. Be especially in Phnom Penh.

Cambodias biggest attraction and tourist magnet is Angkor Wat. It is considered the eight wonder and allegedly the single most impressive temple in the world. While I would doubt that the complex indeed is quite impressive. Angkor itself was a bit of a let down though. Don’t expect too much and you won’t be disappointed.

Other tourist attractions would be the big lake Tonlé Sap, the capital Phnom Penh with its charming French Quarter and the reminders of the Khmer Rouge regime, Rattanakiri for trekking and Sihanoukville the beach resort.

Most popular are public busses. They are not as good as in Thailand and the roads are not all that good but things have improved a lot in recent years. Busses are cheap and considered safe.

There are few trains in Cambodia and it looks as if there are fewer and fewer every year.

Rentals: Whether or not you can rent a scooter depends on the area. It is impossible in Siem Reap (Angkor Wat) and no problem in Phnom Penh, Sihanuokville and other places. It seems to change. The fact that it is being banned in Siem Reap of all places shows that it is a big scam and most likely imposed to force people using expensive Tuk Tuks.

Boats seem to get rarer as well. There used to be regular connection from Krati and Kompong Cham to Phnom Penh but they apparently disappeared. It is still possible to go from Siem Reap to Phnom Penh.

The official currency of Cambodia is Riel. Riel to the Dollar is around 4000 to 1. The thing is, you can’t actually get Riel when you go to an ATM. All they dispense is US Dollar. In rather touristy places all the prices are in Dollar and you have trouble paying in Riel. They might even charge you more should you insist. They do not have cents though so if there is change to give you will get it in Riel. You will always carry two currencies. In rural areas you will need Riel. You should have no trouble exchanging it but don’t change too much. Most Cambodians prefer Dollar.

You can get a visa at the border. A Cambodian visa will cost around 20 Dollar. Especially coming from Thailand agencies will try to rip you off charging almost twice the amount. Don’t bother. Just go straight to the border and then check with Visa on arrival. It might take a couple of hours but this is more or less what the agencies do as well.