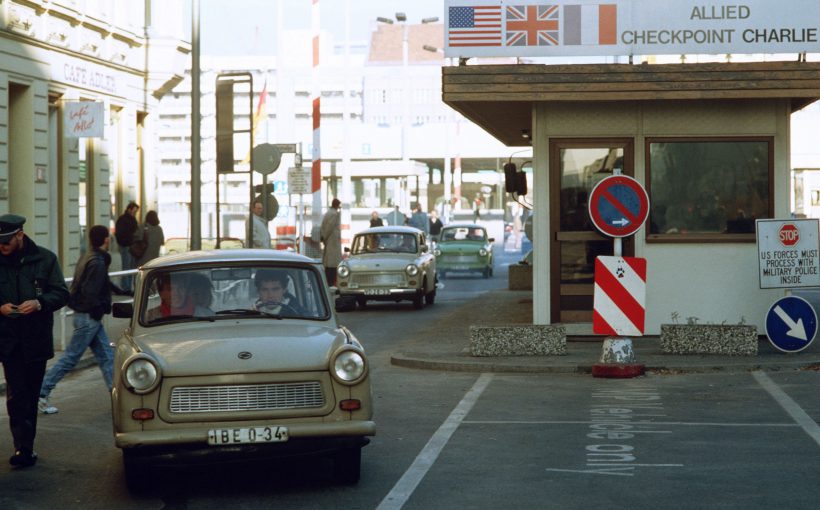 Checkpoint Charlie is (together with Glienicker Brücke) the name of the most famous border crossing between former East- and West-Berlin during the Cold War. It became a symbol for the separation of east and west. Here the infamous Checkpoint Charlie Standoff took place. In 1961 American and Russian tanks faced each other here during the 1961 Berlin Crisis. This could easily have led to World War III so there is some historic significance to this place.

The standoff began as a dispute over whether or not East German border guards are authorized to check U.S. diplomats. The diplomat Allan Lightner only wanted to cross to see an opera it ended with 10 Russian and 10 American facing each other, fully armed and only 100 meters apart at Checkpoint Charlie. The crisis was averted at the end but gave a big fright to a lot of people.

Subsequently Checkpoint Charlie gained a reputation by being a popular spot for people trying to flee communist East Germany. Initially it was only a gate so one person crashed with a car right through it. A pole was put in place it at least two people came in convertibles, simply took the windscreen down and slipped right underneath it. As a result the barrier was lowered uprights were added. Checkpoint Charlie was secured.

People trying to escape didn’t stop that. On August 17, 1962 Peter Fechter became a symbol for the cruelty of the Berlin Wall. While trying to escape he was shot by border guards. His body was caught in barbwire and he slowly bled to death. The Americans couldn’t help because he was technically lying on Soviet territory. The border guards didn’t go either because they were afraid provoking the Allied forces who had shot a guard just a few days earlier. The slow death of Peter Fechter lead to demonstrations on the western side of the wall and some very bad blood towards the Russians. Eventually they even had to use a different border crossing. Angry crowds had gathered to stone Russian busses on their way to Tiergarten.