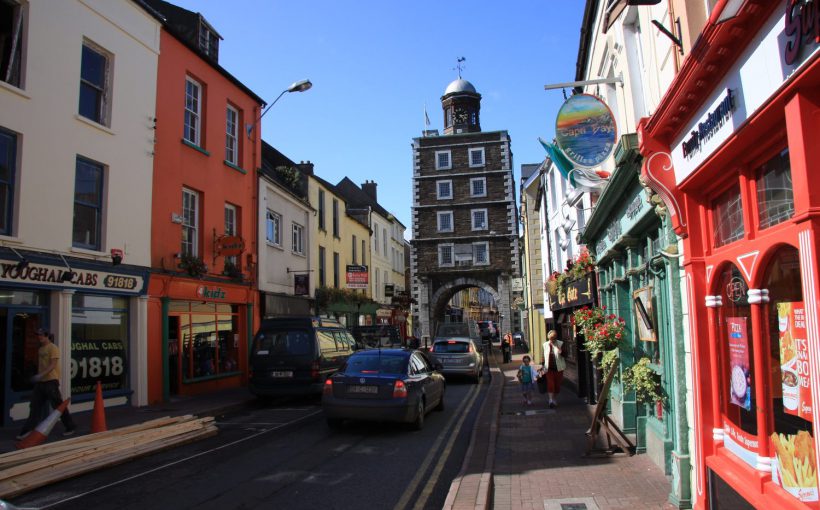 Youghal – pronounced Johl – is a picturesque fishing village on the south coast. It is part in many ways heart and soul of the Irish Riviera. The village is quite beautiful and the nearby beaches are gorgeous. On a sunny day Youghal is pretty much as good as it gets.

Youghal is half way in between Cork and Waterford. To get there simply follow the N25. You can’t miss it. The small town is rich in history and enjoyable to look at. If you are in the neighbourhood you gotta stop and wander around for a bit.

Youghal is situated at the mouth of the river Blackwater. One of the first things one notices is the layout. The village is narrow but quite long. When you drive through it doesn’t seem to end. It strikes as a much bigger place than it actually is. After all only about 6000 people live here.

Another notable feature is the town wall. It dates back to the 13th century. Especially the Clock Gate catches the eye. There are plenty more historical buildings and even a pub with a reference to Moby Dick.

Most prominent is St. Mary’s Collegiate Church which they reckon was founded by St. Declan around 450 AD. Since then in underwent a few modifications including a major rebuild in 750. Allegedly it is one of very few medieval churches in Ireland that have been continuously used as a place of worship. The emphasis is on worship. I recall at least one example where a church has been converted into a pub. I must admit that I was shaken when I first saw it. You’d expect that in other countries, England may be. From a Roman Catholic point of view they are heretics anyways but in Ireland? Shocking! A nice pub though.

Back to Youghal; beside the old town and a rich history it is also a seaport. This attracted the Vikings who set up camp here and used it as a base to raid Irelands south. These days Youghal is packed with tourists. It is said that it is one of the most popular tourist destinations in all Ireland. And that’s the only beef I have with Youghal. Other than that I think it is a beautiful place to stay.

Fishing – Youghal is allegedly is a good spot for salmon, trout and coarse fish. I am still young enough to find fishing extremely boring so this is hearsay.

The beach – yeap I know it’s Ireland we are talking about here but trust me, there are nice days on the Irish Riviera and the beaches do worth it.

Discover the neighbourhood – Youghal is situated in a beautiful part of the country so don’t just go to the pub!

The Blue Flag disaster: Youghal recently lost one of its two blue flags because of some problems with the sewage. City council unfortunately did not act in a timely manner and for all I know untreated sewage still flows into the sea. As a result the beach close to town lost its blue flag. This shouldn’t stop you. They got backup.

Most popular is Evergreen House situated by the beach. It’s no beauty but safe, friendly and clean. Beds start at 20 Euro. It does get mixed reviews though. Our reader Carmelde found it disgusting. I thought it was OK, but check it out yourself. Things may have changed. (The Strand, phone: (024)92877)

Just as popular is Leahy’s Lee House. The place is family owned and managed by Angela and Mike. They have a small town garden and outdoor seating area. They also offerto pick you up from the bus stop at no extra charge. If you come by car even better. There is a private secure car park behind the house. Beds start at 20 Euro. (29 Friar St, phone: (024)9229).