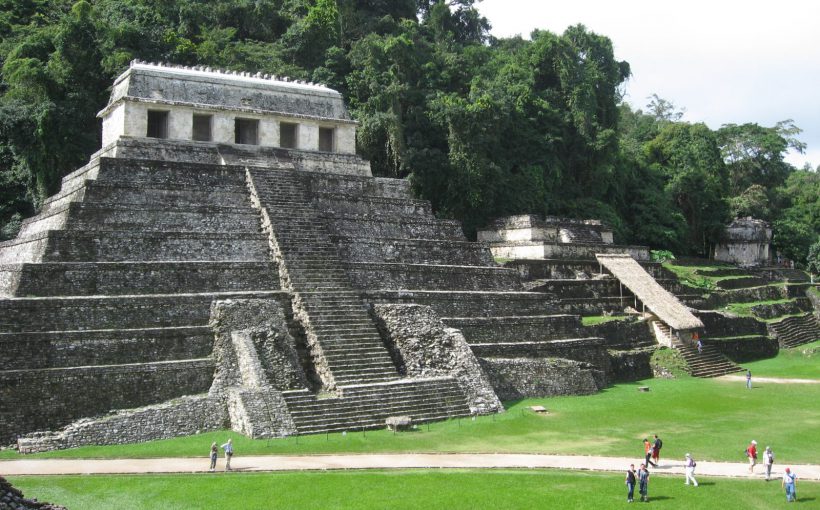 The archaeological site Palenque is considered on of the most beautiful sites in all Mexico. It is located close to modern Palenque town pretty much on top of a hill. You’ll get some spectacular views from there. The site was a built on a series of artificial terraces. It is surrounded by thick jungle, today part of the National Park.

The original name of the Palenque was Otolum literally translated “Land with the strong houses”. The inner city was also called Lakam Ha (Big Water). The springs and cascades at the site give a pretty good indication why.

The Spanish more or less translated the Mayan name when they called it Palenque (fortification). The name indeed makes sense. It is quite obvious that Palenque served strategic purposes. It was heavily fortified. There is evidence of defensive apertures in some of the walls.

A brief history of Palenque

We know little of the cities early history. What we see today dates back to the Late Classic period and resembles Palenque’s “renaissance”. The city was rebuilt – mainly under Pacal the Great 615-683 – and on this occasion fortified. A likely enemy at that time would have been the mighty Calakmul – arch enemy of Tikal and one of the super powers in the Mayan world.

Palenque was the ancient capital of the – during the Classic period important – Maya state of B’aakal. A large number of tablets and inscriptions were found here that shed some light on the cities history. In the second half of the 6th century when the epic battle between Calakmul and Tikal started to kick off Palenque was closely related to Tikal. What seemed like a good idea at the time would eventually cost the city dearly.

By the end of the 6th century Calakmul had temporarily gained the upper hand in the conflict with the kingdom of Mutal; at least that’s what it looks like. During the so called “Tikal hiatus” pretty much no construction took place in Tikal and there is a lapse recorded in the writing of inscriptions. It is assumed that they suffered a major defeat and public life for a while came to a standstill.

Tikal’s defeat had consequences for Palenque. The alliance under the leadership of Calakmul suddenly had a lot of time and resources on their hands. Considering the Mayans obsession with war that was bad news for Palenque. With their most powerful ally being knocked out they were no match for the alliance.

In 599 Palenque suffered a major defeat and was almost completely destroyed. A second attack is reported for 612 where pretty much the entire aristocracy of the city was wiped out. What came next seems strange but wasn’t atypical for the Mayan world. With the enemy defeated they often did not secure their victory by taking over the gouverment. So only three years after Palenque suffered the decisive defeat the cities renaissance began. At that year K’inich Janaab Pakal became the new ruler and with him a new and glorious era started.

With the city destroyed and the old aristocracy being more or less wiped out he could start from scratch. The city was rebuilt and it became bigger and better than ever before. All major structures you see today are a result of the cities resurrection.

Palenque’s new found glory didn’t last very long though. Decline began with king K’inich K’an Joy Chitam II. Palenque was attacked by the realm of Toniná and the king captured. He remained a prisoner for the rest of his life. The victors installed a governor and with the old king still alive no one could follow him to the throne. When the king finally died K’inich Ahkal Mo’ Nab’ III took power but as it looks he did not actually belong to the dynasty. We can only speculate what happened, fact remains that the decline had already begun and by the end of the 8th century the kingdom more or less collapsed. Others followed at the end of the Late Classic period but Palenque was one of the first important centres of the Mayan world that vanished. What lead to this collapse of the Mayan world remains unclear. Excessive warfare, abuse of resources and overpopulation played their part. There is some indication that climate changes contributed as well. Fact is that by the end of the 9th century the southern lowlands have been abandoned while the northern centres continued to flourish.

The Palace is located in the centre of the site. It was built on a terrace that is over a hundred meters long and nine meters high. It’s not actually “one” palace but a bunch of buildings with a very distinctive asymmetrical tower on top. It probably served as an observatory and watch tower. The palace with its rather unusual galleries that offer plenty of shade and last but not least a nice view is quite interesting. Take your time and try to discover all the little bits and pieces that can be seen there including some bas-relief carvings.

Opposite lies Temple XI which you’ll hardly notice because of the much more impressive group that lies south of the palace. Aligned as if they were one are the Temple of the Inscriptions, Temple XII (Temple of the Skull) and XIII and they are quite an impressive sight. Rather unusual about them is the fact that they have burial chambers that were built as such when the temples were constructed. The temple of the Inscriptions is open to the public so you can actually go inside and visit the impressive burial chamber of king Pacal, the legendary ruler of Palenque.

As the name suggests archaeologists not only found the remains of the king but also three tablets which contain a record of the rulers ancestors, astronomical events and a projection into the future. Especially the latter is quite impressive. Who would expect such a projection to go up to the year 4772? The text is remarkable; one of the longest inscriptions in any Mayan monument and a gold mine for archaeologists.

All the temples have quite interesting roof-combs; especially the Temple of the Sun impresses with beautiful relief carvings on top of that. The whole ensemble is just cute. Especially early in the morning when mist is still hanging in the trees it is a spectacular sight.

North from the palace are the inevitable Ball court and behind that the rather interesting North Group. The latter consist of a long platform with five temples. They have different heights but all face down south. You can climb up and check out the passageways with side rooms and entrances. Originally they would have been decorated with stucco reliefs.

Quite interesting is the small structure with that unusual roof that somewhat resembles a pagoda. Apparently early researchers because of it thought the site was connected to the Orient.

At the bottom of the temple to the right is a nice freeze still in situ.

Before we finish this little tour of Palenque one more thing; if you follow the little canal you will reach the so called Queen’s Bath. It is a natural pool just below a waterfall. Give it a go. You might need that little refreshment before you go to the museum.

I admit in most cases after seeing a site like this you’d have other things on your mind than visiting a museum. Make an exception here. The museum is awesome! The museum is at the entrance to the National Park about 1 kilometer down the road from the site. I’d personally take a collective. It’s only 5 Pesos and a long walk after all the climbing in the site itself.