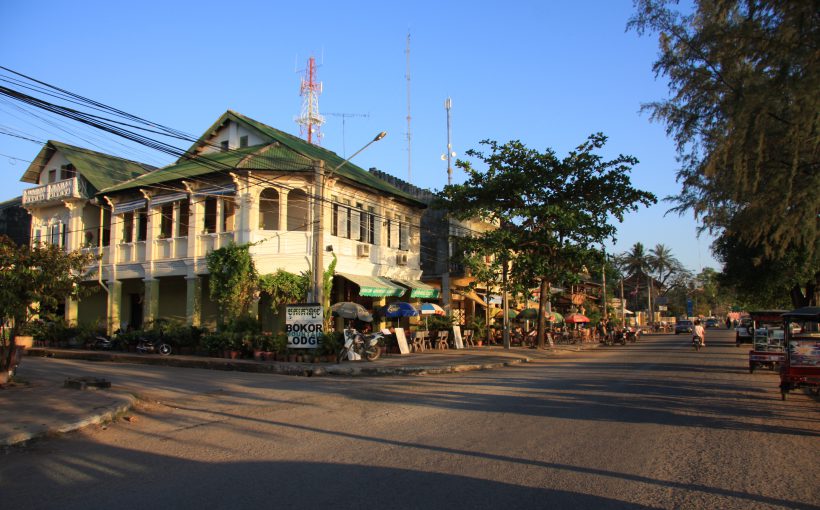 Kampot is a rather beautiful town. It is mellow and surrounded by breathtaking country side. One of its most distinct features is the French quarter along the river Teuk Chhou. A nice promenade invites the visitor to walk and enjoy the tranquil atmosphere.

Unlike most places in Cambodia in is very laid back. Things move a bit slower here. One can enjoy the city without being harassed. People are incredibly friendly, waving at you and saying hello without actually wanting something.

Despite French quarter the town has little to offer though. If you are for an adventure you may cross the old bridge. It leads to the poorer part of town. There are plenty of basic wooden shacks and it looks a bit dodgy.

Besides that Kampot is an ideal base to explore the nearby Bokor National Park. A day trip with a Tuk Tuk costs around 20 Dollar.

Another place worth visiting is the Kampot Traditional Music School where children learn traditional instruments and music.

A min van from Sihanoukville takes approximately 2.5 hours. The trip should cost no more than 6 US Dollar.

There are a number of OK guest hóuses in the small road behind the monument celebrating the Cambodian – Vietnamese friendship. Rooms are between 5-15 Dollar depending on air condition or not.

Kampot Guesthouse – the rooms are OK the guest house itself is a bit dull. The people are OK but not particularly forthcoming. The WiFi promised didn’t work.

Orchid and the Magic Sponge Guest House are next door. Go for the one you like best. The latter is a bit more expensive but looks rather nice. My personal favourite in regards to looks was the Blissful Guest House.

Boko Mountain Lodge is beautifully located on the promenade facing the river. It is an old colonial style building. The restaurant caters for English travelling abroad. It’s OK but not more.

Rikitikitavi on the river is a beauty. They only have 4 rooms so book before going there. The people are incredibly friendly and the place has atmosphere. See also “Food”.

The guest houses usually have their own restaurants. You can hardly go wrong.

Boko Mountain Lodge is mentioned above. Th food is OK but neither cheap nor outstanding. They do have shepards pie though which some people may finde tempting.

Jasmine – allegedly the best restaurant in town if not the province. It is a beautiful small restaurant on the promenade near the old bridge. Go for it!

Rikitikitavi – strange name, beautiful place. The food is decent and the location stunning. On the balcony you get a great view over the river. Like most places in Kampot it is a bit more expensive but by Kampot standards the prices are OK.