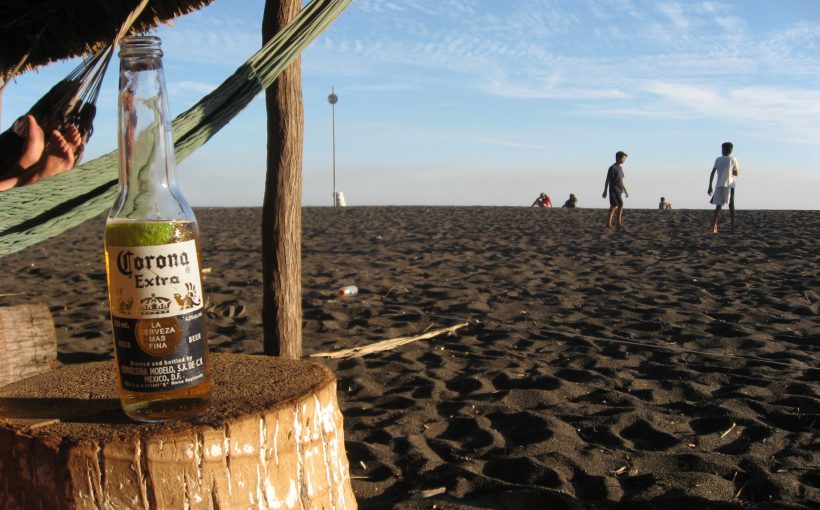 I am having mixed emotions about Monterrico. The place is situated in southern Guatemala near the border to El Salvador. Monterrico is on the Pacific Coast and has a fantastic beach. It is also very laid back and almost a bit too much. It takes time to get in sync with the local attitude.

It is impressive to watch the powerful waves of the Pacific hammering against the beach. They create an awesome but also frightening sound. Swimming here is dangerous and the waves are too short for surfing. Why would you go to Monterrico then? I’ll come with a couple of good reasons in just a moment.

Monterrico is a laid back village in the middle of nowhere. It is surrounded by mangrove swamps and just next door is the Monterrico Nature Reserve. In many ways it is spectacular but as I said; it takes some time to get used to it.

When you arrive via Taxisco it is a ten minutes walk to the water front. On the way you pass pretty much everything there is to see. Monterrico is a dusty village with only a couple of roads, a few restaurants, hotels and one internet cafe. That of course is all you need in a place like this.

Unlike further up north in the mountains it is boiling hot here and the beach is impressive. Because of the black volcanic sand it is impossible to walk on it during the day. It is too hot. You need shoes.

For once no one seemed particularly eager. If you want to conduct a business deal of any kind you have to ask. That’s unusual for Guatemala. In most places people wait for you and try to sell you whatever; not here. The people are as laid back as the place suggests.

A regular day in the life of a local seems to be; getting up, breakfast, siesta, beach, dinner and then retire early. May be the reason why I first didn’t like the place was me being jealous. It is pretty much my idea of a paradise.

Once you get passed that first impression and adjust your routine the place is actually really cool. What they lack in motivation serving you they make up in smiles, kindness and their ability to have fun and to enjoy themselves. Yes, I was jealous and I would go as far as saying: Don’t go there if you are on a tight schedule. You’ll regret it! If on the other hand you got plenty of time, Monterrico might just be the little paradise you were looking for.

From Antigua you can book a shuttle which is by far the easiest way. Other than that there are two possible routes. You can go to Iztapa, and from there take a bus. The bridge was finished only recently.

The other route leads through Taxisco. From there you take a Collectivo to La Avellana and boat from there. The second route is more picturesque since the boat goes through the mangrove swamps, through Iztapa is more straight forward.

Monterrico Nature Reserve – you can book a tour. There is plenty of wildlife to be seen. I don’t know much abut it but you’ll see a lot of birds, turtles and allegedly even crocodiles. Bring repellent!

The number place to stay is Johnny’s Place right at the water front. It fills up quickly so you should book in advance. The bungalows are nice and so is the setting. The restaurant has free refills for coffee, the service tends to be slow though.

There are more places at the beach. Next door to Johnny’s is Hotel y Restaurant Kaiman. It’s just as good as Johnny’s.

Hotel San Gregorio is a little more posh than the other places but looks awesome. They have a large and very nice pool. Not a bad idea in a place where you can hardly swim in the sea.

There doesn’t seem to be an ATM in town. Credit Cards are accepted though.