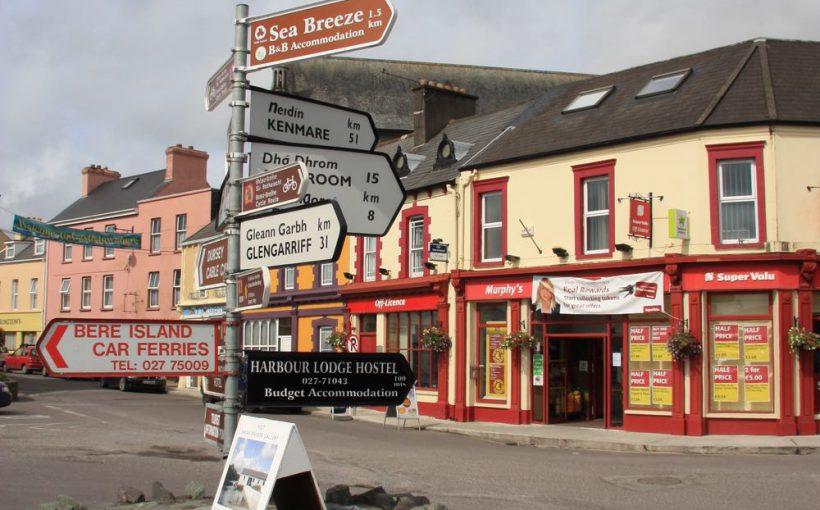 Bantry is a small town in the south west of Ireland. One could think of it as the gate to the Ring of Beara except not all that many people actually know the Beara peninsula. Assuming that you want to explore the beautiful south west of Ireland the town is ideally located though. It’s right at the end of the Bay of Bantry which separates Sheep’s Head and Beara.

These two peninsulas are situated just below Dingle and Ring of Kerry. Looking at the map you will see four fingers that form the south west corner of the Emerald Island. What they all have in common is; they are very beautiful. The main difference is that – unlike on the Dingle and the Ring of Kerry – the Ring of Beara is rather quiet.

It is surprisingly difficult to explain the appeal of Bantry. At first the town is nothing special. Sure the Gulf of Bantry is spectacular but being spectacular is a rather common thing on the Irish west coast. The coastline in this particular area is breathtakingly beautiful but then again; this isn’t exactly unusual for the wild south west. It is conveniently located but only if you are planning to visit Sheep’s Head and go around the Ring of Beara. Otherwise it is in the middle of nowhere. Surprisingly few people even heard of these places. So why go to Bantry?

There is a reason; a very good one actually. Most people have heard of Dingle and the Ring of Kerry and they all heard how stunning the country side is. So they all go there and by all I mean ALL. It’s shocking. The Ring of Kerry in high season is like rush hour in Dublin except it’s all busses. I mean what is the point going to a country side that is full of people? And most of them are tourists; the very same people you meet at home. The Ring of Kerry isn’t even that beautiful. It is but I wouldn’t say it is the best there is and ever will be. And now let’s talk about Bantry again. Guess what; since not that many people know this place, it is nice and quiet. And it’s just as beautiful!

There is nothing special about the town but everything is somehow right. There are a number of hotels and B&B’s but as the touristic infrastructure in general they are unobtrusive. You’ll hardly notice them. There are a few restaurants around the central square but again; they aren’t fancy just good. They cater for the locals not for tourists. That doesn’t mean you are not welcome. Quite the opposite; people here are extraordinary friendly.

As a result and that is another thing you will probably like is the generally level of prices. Starting from the B&B and ending with a pint at the bar everything is much cheaper than in for example Dingle or Killarney. I will admit there is not all that much to do in the town itself other than simply enjoying yourself but then this is more or less what I intend to do when travelling. Bantry is the perfect base to explore the wild south west of Ireland. I’d pick the Ring of Beara over the Ring of Kerry at any day. It is just as beautiful and there is a lot less traffic. The town also provides an authentic atmosphere. They look at tourists as guests not just the bringers of wealth and revenue and they embrace them. You can tell and this is what I like most about Bantry.

Some facts then: Bantry is technically in County Cork but the northern bits of Beara already belong to County Kerry. The town has a population of 3300 people. The most important industry at this stage is mussel farming. It used to be different though. There was a time when oil played a major role.

The most distinct feature of Bantry bay is Whiddy Island. It shelters the entire bay which is good for the mussels but also made it an ideal location for an oil terminal.

In the 1960’s ever bigger oil tankers were being designed to transport the oil from Middle East and Europe. These Ultra Large Crude Carriers were to big for any normal port so oil companies came up with the idea to build a central location where these vessels could unload. The oil would be stored and then taken on by smaller tankers and transported to its final destination. Whiddy Island ticked all the boxes; ideal location, deep water anchorage and no major population centres nearby. The facility was in 1967 and completed in 1969. The original terminal was owned by Gulf oil.

On 8 January 1979 disaster struck. The oil tanker Betelgeuse exploded while discharging its load of crude oil at the terminal. 50 people died in that incident. As a result the fishing grounds were more or less ruined and remained so for years. Fortunately the storage tanks did not explode in this incident.

The terminal was more or less abandoned afterwards. It was later determined that there was no need for such a facility anymore so in 1986 it was handed over to the Irish government. They then used it to hold the strategic oil reserve. During the Gulf war in 1990 interest in this facility rose again. A new unloading buoy was fitted and since 1996 (officially since 1998) Whiddy Island is back in action. It now belongs to the ConocoPhillips Corporation and the terminal is working at full capacity again.

The one thing a visitor literally cannot miss is Bantry’s massive central square. It appears a bit over dimensioned for such a small town. There is an explanation. What you now see as the plaza used to be the shallow port. Since a shallow port is a bit useless the filled it with land and voila, they had a massive square in the middle of the town.

Rather than building houses on it they used it for the regular cattle fair. In our days it is mainly used for public functions and the weekly market.

There are a couple of B&B’s at the waterfront. When standing on the square looking at the bay keep right. They are all OK and you should get a room for 30 Euro.

To get to Bantry follow the N71. No matter from which direction you come, it is a bit of a drive. The road has improved in recent years but it is not exactly a motorway. There are busses from Cork and Killarney.