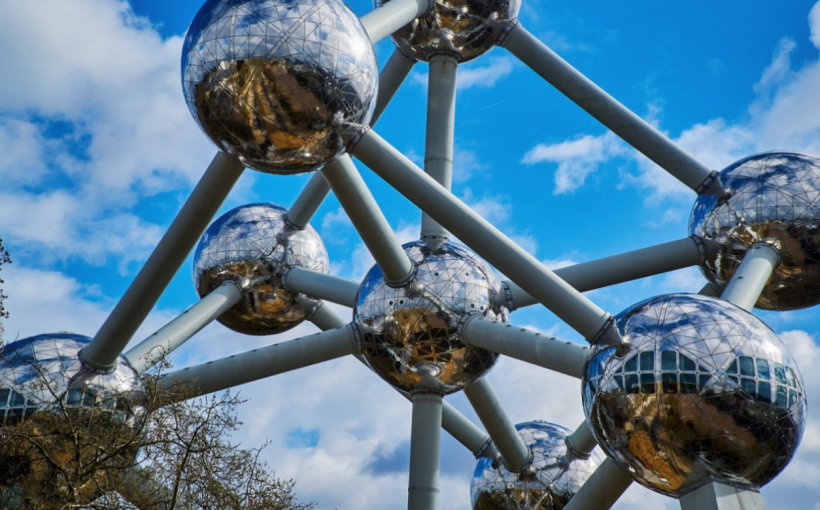 Brussels may be the capital of Belgium and the capital of Europe but the most famous landmark building of Brussels is the Atomium. It is by far the most popular and most visited sight in Brussels. There is a reason as you may guess: The Atomium is really impressive. We like!

The Atomium was originally constructed as a landmark for the world expo 1958. I am not entirely sure if it was ever meant to last, but it certainly did (very much the same as the Eiffel tower in Paris by the way).

Whatever the ambition of the builders were, they did well. The Atomium did not just last, it became one of the iconic buildings of our time.

The design goes back to André Waterkeyn, a Belgian engineer and director at a federation of metallurgical companies. He actually kept the copyrights of all reproductions of the Atomium. It represents a cubic cell of an iron crystal, built of nine atoms. Basically the look through an electron microscope in to the atomic structure of an iron crystal.

The 9 spheres, representing the atoms, each have a diameter of 9 metres and are built from stainless steel. Originally they were padded with aluminium sheets but these faded over the years and were replaced with stainless steel when the Atomium was renovated in 2006. The spheres are connected with tubes that have a diameter of 3 m. They form the twelve edges of the cube and eight connection to the center.

The real cool thing is, inside these tubes are stairs and escalators. You can go inside. There even is a superfast lift. It can get 22 people to the top sphere in 23 seconds. In the top sphere you will find a restaurant with an awesome view over Brussels.

In the lower spheres there are normally exhibitions. The whole thing is just spectacular.

The downside of the popularity: There often are long queues. I would seriously recommend buying your tickets upfront.

One thing I found seriously odd, if your child is shorter than 115 cm it gets in for free. If the child is taller it has to pay the same as for example a student. My boy is four years old and he only just got in for free. I find this very odd.

The Atomium was built as a symbol for the atomic age and the peaceful use of nuclear energy. In the 1950ies we still had high hopes for the technology. To make their point they built a real nuclear reactor underneath the Atomium as a show-and-tell piece for the expo. How awesome is that?

The university of Basel got hold of this after the expo and used in one of their faculties for research and training. They only retired it in 2015.

And don’t get mislead by picture. The whole thing is 102 metres high. In the original plans they wanted to make it even bigger but apparently there were concerns about air traffic safety. They therefore had to scale it down by 30 metres. The whole thing weighs 2.400 tons. Not bad for a few atoms right?

It is located on the Heysel Plateau in the north of Brussels.

Here is another interesting piece of information. As mentioned, André Waterkeyn had secured the copyrights for all reproductions of the Atomium. He eventually passed these on to the society owning the building sometimes around 2000. It did not end there.

Belgium’s society for collecting copyrights (SABAM) became infamous for taking infringements very serious. There was a long feud between them and the rest of the world concerning picture of the Atomium. Websites had to remove pictures of the Atomium and technically they could have sued anyone for taking a picture of it.

In 2016 a bill, proposed by the Open Flemish Liberals and Democrats, was passed to enable Freedom of Panorama in Belgium. Ever since you can take pictures and legally distribute them.

Any cookies that may not be particularly necessary for the website to function and is used specifically to collect user personal data via analytics, ads, other embedded contents are termed as non-necessary cookies. It is mandatory to procure user consent prior to running these cookies on your website.