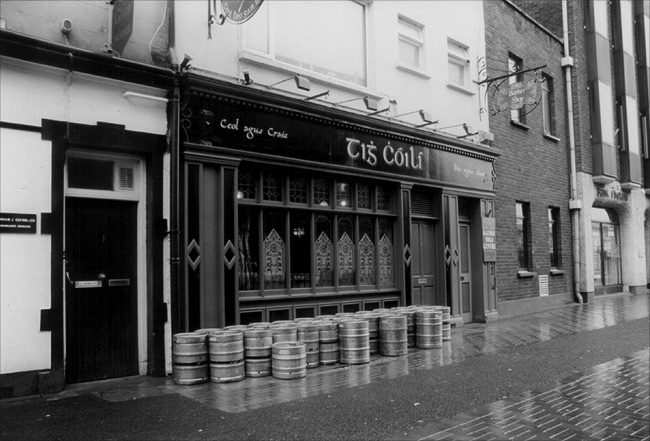 Galway (Gaillimh) is a city on the Irish west coast and capital of the county Galway. The county itself belongs to the province Connacht. With 70.000 people Galway is one of the biggest cities in Ireland but, as the figure suggest, that’s not saying much. The city in many ways is the metropolis of the west coast though.

Galway is situated at the bay of Galway and on the river Corrib. If you look on a map it lies more or less opposite Dublin. Where the Irish capital is the dominating city of the east coast, Galway takes that crown for the west. It is an economical, cultural and – with the local university – an intellectual center. Despite all that Galway is actually quite charming and beautiful.

Tours and Day Trips Galway: There are several great tours of Galway. Especially tours to the magnificent Cliffs of Moher and boat tours are very popular: On this link you can find a good overview of different tours

There are a number of suggestions what the name Gaillimh means or where it comes from. The name literally translates as “fort at the mouth of the stony river”. Some say that Galway actually comes from Gall which translates as foreigner making it the “city of the foreigners”?

Both options have one thing in common. They sound neither heroic nor romantic. They are completely unacceptable for a city with such high aspirations. So the locals came up with another etymology.

In short the story goes like this: There once lived a chief in the area and his daughter was called Gailleamh. One day she drowned in the river. To mourn her death the chief founded a camp at the mouth of the river. This camp soon turned into a settlement and in honour of the chief’s daughter it was named Gaillimh. I’m glad we sorted that out.

It’s not quite clear when Galway was first founded. The oldest records about a fort at the mouth of the river Corrib date back to 1124. We’ll take that.

Being a small military installation it was popular with friends and foes. Some hoped for protection others for plunder. Such were the days. “Galway” got attacked on a regular basis. 1232 the fort finally fell and was taken by Richard Mor de Burgh. While this sounds horrible it actually worked out quite well for the people living there. Galway started to prosper under the rule of the De Burghs. In 1396 Galway it even became the title of a city awarded.

Since this is no place for history lessons let’s keep this one short. While the locals are nice people they did not always chose their enemies wisely. Galway burned down or was destroyed on a number of occasions. For hundreds of years Galway was a rather insignificant town on the periphery. The harbor was in ruins, the only kind of sea trade was piracy, the city seemed doomed. The big turnaround came with the foundation of the Queens University of Ireland in 1845 and they haven’t looked back since.

Galway these days is a prosperous and well renowned for its cultural life. Most famous is annual the Galway Art Festival with it the Macnas parade. At some stage the city had over 50 different cultural venues.

Galway is also the unofficial capital of the Gaeltacht, an area in the west of Ireland where Irish (Gaeilge) is still actively spoken. Not surprisingly TG4, which is the only one of the four public TV stations that broadcasts in Irish, set up their camp here rather than in Dublin.

Galway was particularly delighted when in 2007 it was voted one of the top 10 sexiest cities in the world and it was in the top 50 of the best tourist destinations worldwide. That should tell you something.

Life in many ways centers around Eyre Square with the John F. Kennedy Park. Spanish Parade is another popular spot. It is next to the cities most famous landmarks the Spanish Arch.

The most famous landmark is probably St. Nicholas’ Collegiate Church. It is the largest medieval church that is still actively used as a place of worship. It was founded in 1320 and is quite impressive.

One cannot look at it without noticing the most imposing Cathedral of Our Lady Assumed into Heaven. It was only consecrated in 1965 but one would not think so. It looks old. That is mainly due to the massive renaissance dome I guess. It doesn’t look like a modern building at all. It has pillars, oldish looking arches and a very distinct portico. Personally I would have thought it is old.

Close by is another landmark in form of the original building of the National University of Ireland. It is a so called quadrangle. In architecture this typically describes a rectangular square that is surrounded by large buildings. The style is fairly most common with universities and palaces.

Another highlight is Lynch’s Castle on Shop Street. It is a beautiful medieval town house and – this is rather sad I must say – a bank.

Another well-known landmark is the Spanish Arch that was originally built to protect the quays around the Fish market (now Spanish parade). After they were extended the arch instead allowed access from town to the new quays.

The statue of the famous Galway poet Pádraic Ó Conaire is no longer on Eire Square but in Galway City Museum. The museum focuses on the local heritage but also has an impressive art collection. If you are interested in contemporary Irish art – meaning second half of the 20th century give it a go.

Galway is a perfect base to explore the Aran Islands or Connemara. It is also relatively close to the Cliffs of Moher. I cannot recommend going there any longer though.

The local council decided that ripping people off is significantly more important than preserving one of Irelands natural wonders. They therefore took about 1 million tons of concrete and build paths, walls and a visitor centre. As a result you can hardly see the cliffs anymore. Instead they now charge admission to this NATURAL wonder. It is outrageous.

There is also plenty of entertainment in Galway itself. This is just a small selection.

Tigh Neactain (Naughtons) is probably the most famous Galway Pub. It is immensly popular and renown for it diverse clientele. They got everything from banker to hippie.

Roisin Dubh is one of the leading live venues in Galway.

I take the name speaks for itself; the Bierhaus has a fine selection of beers and specialities. It is located in the West end of the City.

If you are more into cubbing try Central Park Nightclub. It is quite big and has 2 dancefloors and 7 bars. It attracts a rather young crowd. Located in Central Park / 36 Upper Abbeygate Street.

Just off Eyre Square is Karma Nightclub (formerly known as The Alley). It’s particularly popular with students. Do I need to say more?

Nearby is the Club Cuba. Open 7 nights a week and located just above Bar 903 in Eyre Square. If uyou prefer indie and rock this is the one to go for. They have regular live performances and they host the Comedy Club.

If you are travelling on budget there is no alternative to a hostel.

Just off Eyre Square and close to the station is The Galway City Hostel. A bed in a dorm cost 12.00 Euro.

Also on Eyre Square is Kinlay House Hostel Galway which is slightly more expensive but received good reviews from people who stayed there.

Tours and Day Trips Galway: There are several great tours of Galway. Especially tours to the magnificent Cliffs of Moher and boat tours are very popular: On this link you can find a good overview of different tours