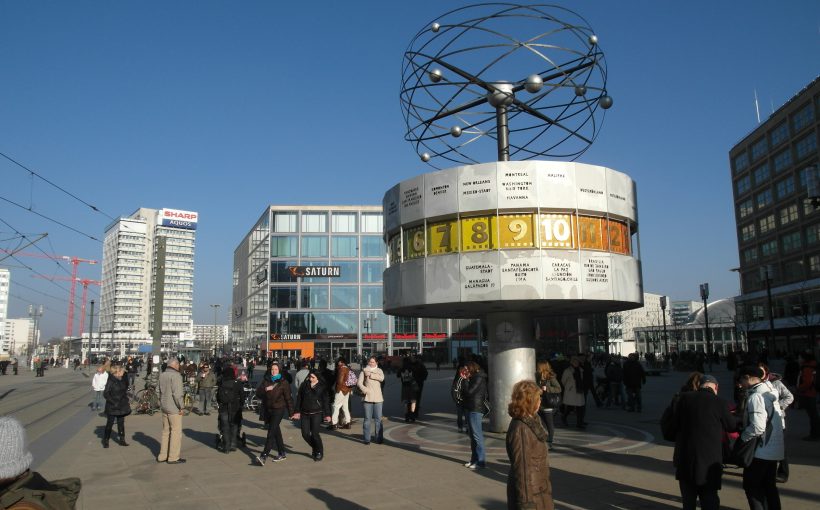 Alexanderplatz in Berlin Mitte is one of most famous squares in Berlin. It is right in the heart of the city at the bottom of the boulevard Unter den Linden. Here (or nearby) you’ll find some of Berlins most interesting sights including the TV Tower, World Time Clock, Museum Island (Museumsinsel) with the Pergamon Museum, Nikolai quarter, City Hall (Rotes Rathaus), Berlin Dome and Humboldt University. Locals refer to Alexanderplatz as Alex.

The square started out as a cattle market in the early 19th century. It was in fact named after the Russian Czar who had visited Berlin in 1805. By the end of the century Alexanderplatz was connected to the local train system (S-Bahn) and got its own train station. A subway station (U-Bahn) followed in 1913. Alexanderplatz quickly turned into a commercial hot spot. The first big shopping center opened in 1904. By the 1920ies it – together with Potsdamer Platz – was at the heart of Berlin’s night life and a major traffic hub. It inspired authors and artists like Alfred Döblin who wrote the famous novel “Berlin Alexanderplatz”?.

It underwent massive redevelopment and not all of it was for the better. For example, the communists decided that the center of Berlin doesn’t need another palace. They blew up the Berliner Stadtschloss and build their very own version of a palace instead. The so called Palast der Republik (palace of the republic) was built for the people but it was also the place where the East German government would reside.

It was a modern looking 1960ies style glass palace, so not particularly pretty. The East German government was proud of it anyways and rightfully so. At the time it was considered awesome. And quite frankly, the places they built in West Berlin at that time weren’t any better. The “Kulturforum” on Potsdamer Platz for example, with Berlin Philharmonics, Berlin State Library and National gallery is a perfectly good example for modern architecture in the 1950ies/1960ies. It’s hideous.

Ironically after the German reunion the new government had nothing better to do than to reverse some of the changes. And you can guess which building they picked. If your guess was the Communist Palace for the people you were right. They blew it up. In it’s place they kind of rebuild the old Prussian palace. It is now called the Humboldt Forum. At least the whole thing was funded by private investors. As we are in Berlin they of course did not manage to finish it in time for the 250th anniversary of Humboldt (2019) but apparently it will open in 2020.

I cannot say for sure who decided that the Kulturforum should be preserved and the East German Palace of the people destroyed. What I will say, it is a disgrace. You can tell who won the Cold war.

When it comes to building management and long term strategic decisions you sometimes do get the impression Berlin is run by morons. Also it is hard to believe that they got away with demolishing an iconic building with such a historical relevance and restore the old palace of the King of Prussia. Why? It is all rather odd.

Back to the subject: Other additions to Alexanderplatz were welcomed. The TV tower for example. It is the second tallest structure in Europe and incredibly popular. The view from up there is stunning. The visitor center is a staggering 204 meters above the ground. You’d have to go to Moscow to top that.

Also; the commies turned Alexanderplatz into a pedestrian zone. That certainly was a good idea. One of my most popular tours through Berlin starts at Alexanderplatz. From there you can hit TV tower, Red City Hall, the Berlin Dome, then sidestep on to Museum Island, back passing Humboldt University, up Unter den Linden, then arriving at Brandenburg Gate and Reichstag.