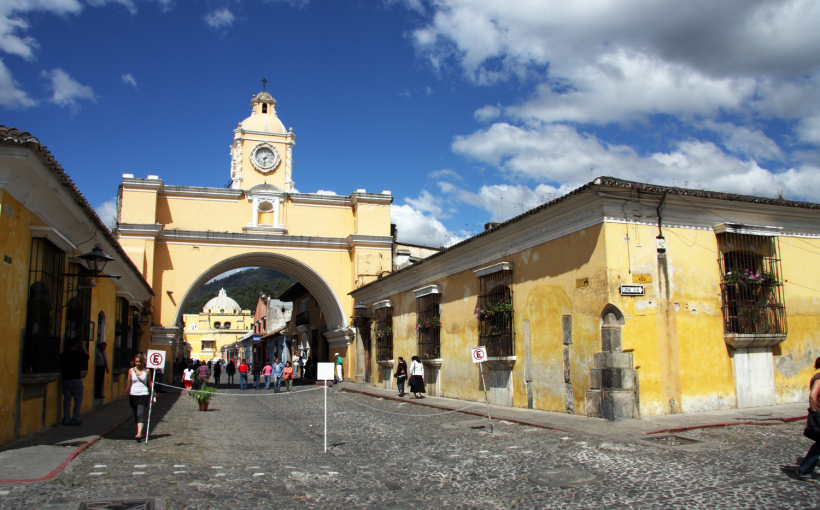 Antigua is the old colonial capital of Guatemala. It is pretty and vibrant, it is famous and it is easy to reach from pretty much everywhere. That not only sounds like a tempting combination so you won’t be surprised that the city is a popular destination for tourists and locals alike.

Antigua is only about one hour bus drive from Guatemala City but it is a different world. There a no ugly skyscrapers and no traffic, the city is as clean and as pretty as they say. Did I like Antigua? No, I actually didn’t and I will tell you why. Antigua is a tourist trap that has sold its soul to the devil. Other than that it is quite impressive.

The problem I had with Antigua is probably that I my expectations were rather high. From what I had heard and read it was supposed to be a bit like San Cristobal in Mexico. The latter is one of my favourite places in all Mexico. I absolutely loved it there and I do maintain that is one of the most beautiful cities ever.

Antigua does have the looks but is lacking the bit I liked most about San Cristobal: Where San Cristobal has a heart of gold, is beautiful, vibrant, warm, entertaining and funny, Antigua simply has no soul. As far as I’m concerned Antigua is – and there is no better word for it – a tourist trap.

That doesn’t mean you shouldn’t go there. Quite the opposite; Antigua is a must see when travelling to Guatemala. Not going there would be like visiting Italy and skipping Venice. Now that I think of it; I have visited Italy on a few occasions and even spend a week in Trieste which is literally around the corner from Venice and still I never managed to see the so called Queen of the Adriatic… well that’s me. You should go there. And rumours has that most people like Antigua. There is a reason why the city is a designated UNESCO World Heritage Site.

Building a city right next to a massive volcano doesn’t really strike me as a good idea but – fair play to them – they did get away with it until 1717 when disaster struck. A massive earthquake left most of the city in ruins. Apparently authorities at that stage thought that the location isn’t so safe after all but that is as far as they got. In 1773 Antigua destroyed again by a series of earthquakes.

This time authorities got the message although I am not sure if they really did or just acted because the Spanish Crown told them so. Again and for the last time the capital was moved and to its present location. It also was renamed to Nueva Guatemala de la Asunción instead of Ciudad de Santiago de los Caballeros de Goathemalan which is an improvement.

Although Antigua was to be abandoned some people stayed. Today the government spends a lot of time, money and effort to carefully restore the old capital. For what I can tell they are actually doing a good job. They keep the balance between restoring the original and preserving the ruins that give the whole place its unique charm.

Things to see in Antigua

La Merced – the church looks rather pretty from the outside but is nothing special when you go in. Like most buildings in Antigua it is painted in warm earthy colours; yellow on this occasion.

To get there you walk up Av. 5. The street is particularly good looking even by Antiguas standards. The most distinct feature is a little archway half way up the road. On Sundays there are sometimes classic car shows or so I was told. As a result Antigua is even busier on Sundays than it is during the week.

Parque Central – The central square is picturesque. The fountain there dates back to the 18th century. The best view you get from the Cabildo (Municipal Palace). It is the building at the northern end of the square. You can walk up to the second floor and overlook the whole Parque Central from the balcony. With the volcano in the background it truly is a spectacular view. To the left (east) you see the Cathedral and opposite Palacio de los Capitanes Generales. To your right is some sort of shopping arcade.

Convento de las Capuchinas – the old monastery is a tranquil place and perfect to take a break. Like most things in Antigua it cost money to get but for once I would actually go for it. Admission is 30 Q.

Other places of interest are Convento de Santa Clara, El Carmen and of course the Cathedral. There are countless ruins that worth visiting. Unfortunately in most places they are trying to charge you. This one of the things I really disliked about Antigua.

Despite that it is a beautiful place with a rich history.

In June 2018 Antigua saw a series of volcanic eruptions at nearby Volcán de Fuego. While there was no immediate thread to the city, it still was a major disaster for communities closer to the volcano. The violent eruption left almost no time for evacuation. Close to 200 people died according to official sources. Local communities estimate that up to 2000 people have died in this tragedy. Many could have survived with a proper warning system.

The eruption produced an ash column 15 kilometres high which lead to the shutdown of La Aurora International Airport. Communities closer to the volcano were affected worst. 3,100 people from nearby areas had to be evacuated. The combination of hot ash and heavy rain proved particularly toxic as it produced so called lahars, volcanic mudflows. Several villages were completely buried.

Another violent eruption followed in November of the same year.

All in all 1.7 million people were affected by the eruptions. Antigua itself was not hit directly. Route 14 south was closed but alternative routes remained open.

La Casa de Don Ismael, 3 Calle Pte 6 is quite nice. If they have nothing available there is another place next door which is sleaper cheaper and almost as good. I can’t remember the name though.

Another place I’d recommend is the Yellow House. It’s in 1 Calle Pte 24

If you just won the lottery or you inherited a small fortune which you now want to blow on bed and breakfast go for the Casa Santo Domingo. It’s awesome! I went there just to have a look around. The place was built in the ruins of an 17th century convent. It’s quite impressive and they have their own little exhibition with finds from the excavation.

The only place I would actually recommend is the Fusion – restaurant and Bar. The places has a spectacular setting and moderate prices.

Popular is Reilly’s Irish Pub and Bar. the thing I disliked most about this place – besides the audience it attracts – are the prices. I felt I was sitting in an actual Irish bar in Dublin.

This unfortunately applies to most places in Antigua. As far as I’m concerned the whole town is one big rip off.

Places I at least want to mention since it is not really their fault that they are in a place where ripping people off is part of the popular culture are: